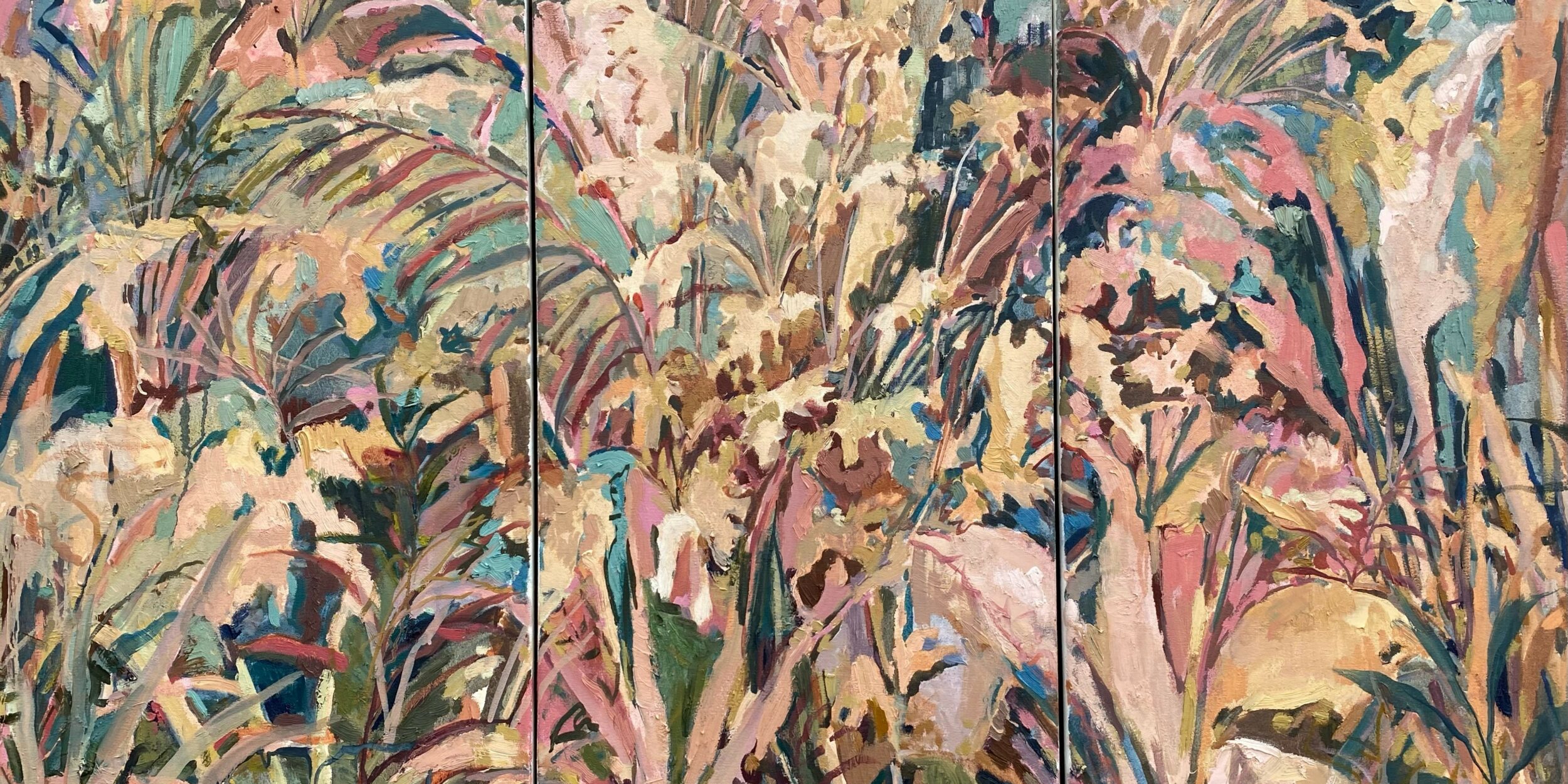 Artist Beatrice Hasell-McCosh grew up surrounded by plants in her childhood Cumbrian garden. When lockdown started in 2020, she found herself back in the garden, this time with her paints and sketchbooks in tow. As the seasons changed, a collection of monumental and beautiful paintings emerged, documenting the flowers and plant-life as they ebbed and flowed through the year. These paintings are now on display at the Garden Museum for her new exhibition, Of Silence and Slow Time. We asked Beatrice a few questions to find out more:

The exhibition is inspired by your childhood garden in Cumbria, can you tell us a bit about this garden and how it inspired your paintings?

I think it’s very easy not to fully look at the things that you’ve known the longest or been surrounded by your whole life. Lockdown in 2020 was the first time I’ve been able to continuously return to the same places to draw over successive months. At the end of April and the start of March obviously not much was out and the garden was still asleep but slowly everything began coming up. Good shapes of the Euphorbias first, followed quickly by larger leaved plants and then fireworks and bursts of colour like the Alliums and the Fritilaria Aurora.

The garden is open to the public so it is somewhere that has always had a lot of people pottering around in which is nice but it was also incredibly special to have the space to myself to work in over 2020.

The paintings were made using the drawings and memory as references back in my studio and quite quickly it became a series based on the seasons so the four main works in the exhibition are Come Into The Garden Maud (Spring), Of Silence And Slow Time (Summer), Brobdingnag (Autumn) and Blue Monday (Winter).

My parents attend church regularly which they couldn’t do during lockdown so instead on Sunday mornings we’d go and sit at the top of the garden and all have coffee together as a family. I think outdoors space for so many people became so important, similar to worship in a religious space so this venue of a converted church that the Museum inhabits was hugely inspiring for the pieces. The season works were created specifically to hang in between each arch, twisting their way up and filling the space in an ode to nature. The works made in diptych and triptych form are partly referencing church alter pieces or decoration such as the church Chagall did all the stained glass for in Kent or the Ghent Alterpiece.

Have you always taken an interest in gardens and plants growing up, or was this a new passion discovered through lockdown?

When we were little mum used to plant things to draw us into the garden so one of the first things we did was plant a garden of animals: things like Bears Breaches, Foxgloves, Zebra Grass, Parrott Tulips and Elephants Ears. Obviously well organised though: for instance the Elephants couldn’t be near the Mouse Plant or the Foxes nears the Lambs Lugs.

In terms of actual gardening I absolutely leave that to the pros as ironically I tend to kill any poor plant that crosses my path. I am hugely admiring of the skill and creativity of anyone who can create a garden and keep it alive and thriving and this is something that my mum Jane Hasell-McCosh is exceptionally good at.

Mum inherited the garden from my grandmother and she in turn from her mother in law so there is a long history of plantswomen who have touched this garden over the past century and beyond. That history and sense of place is incredibly important to me, the fact that it is a Cumbrian garden, laid out quite formally but surrounded by the spectacular landscape of the fells.

Your paintings are so full of detail and life! Can you walk us through your process from start to finish of creating a new painting?

Drawing is immensely important for me and having spent a year at The Royal Drawing School in Shoreditch it is central to my practice. I spent as much time as possible outside making drawings from life. I only really take sketchbooks, watercolour and pencil out and about as it’s easy to carry and pack up quickly if the weather turns sour.

What I like about this is that when you come to paint back in the studio memory becomes a really important tool alongside those small sketches so I never work from photographs.

I get asked a lot how long the paintings take and the answer is that they could keep going ad infinitum. I start quite quickly and get quite a lot down on the canvas and then might leave it to settle for a week or so before going on with it. I have breaks in painting for a couple of weeks too to help each layer dry before working into it again. The larger ones were all began in 2020 and finishing touches added in early 2022. 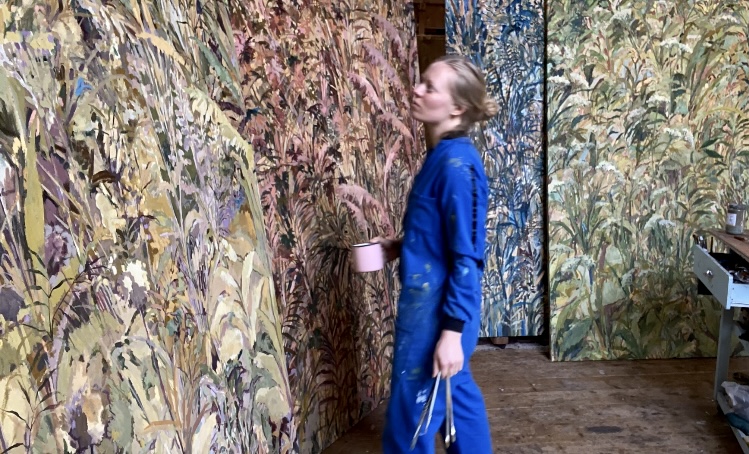 Are the paintings based on specific real plants or is it more abstract?

I try to start with specifics as a basis for each painting so with STEVE the key plant was the round purple Allium shape and for Blue Monday the ferns and bracken that was still out or was dead but still had a good shape at the end of 2020. What’s nice though is being able to not be too committed to painting reality. Part of the scale of the paintings is this idea of being able to step into a world and be surrounded by it. Brobdingnag (Autumn) was the first of the mural series to be made in April and May 2020 when the garden really only is just getting going, so a number of the plants in there were made up or referenced from previous drawings.

The large works are much more about colour palette choices and gestural use of marks rather than being very figurative although it is fairly easy to pick out recognisable shapes and tones.

I have a huge plan chest full of drawings and old sketch books which I look back at regularly and so something made last week might sit in the chest for 6 months before it becomes the basis for a painting.

Your paintings have some interesting titles, what inspires these?

I did English and Classical literature at Leeds University before art school in Edinburgh and London so I read a lot around a subject that I’m thinking about. Primarily the titles reference a sense of isolation or separation for this body of work. Brobdingnag was the land of the giants in Gulliver’s Travels that he lands on and is immediately a spectacle because of how small he is. Blue Monday is the day in January that everyone supposedly feels the most depressed on. Come Into The Garden Maud is from Tennyson’s poem where the narrator is waiting for the object of his affection , Maud to join him. Of Silence And Slow Time is a line from Keat’s Ode On A Grecian Urn where the narrator is talking about the marriage party scene frozen in time on the side of the Urn, so similar to peoples lives during the pandemic.

I like to bring in other elements of research, art history or humour too, Candy Stripers was in part named for the bubblegum pink of the palette but also a reference to the volunteers who help in hospitals in the USA. The art critic Clement Greenberg disparagingly described work by the female abstract expressionists as just ‘candy’. Joan Mitchell, one of those female abstract expressionists made many of her works in multiple parts which was one of the influences for my own works made in diptych or triptych form.

Do you have a favourite work in the exhibition?

I always like the ones I’ve worked on most recently. Those are the ones which have all your latest ideas and thoughts in them so the most recent work was Of Silence And Slow Time. All of them have elements like small brush strokes or particular colour next to colour combos which are very satisfying to point out though. The watercolours represent very happy hours spent in the garden too in terms of memory of the place at the time.

Are you working on any other exciting projects you’d like to mention?

This show has been in the works for so long so it’s nice to just sit and be in the moment and enjoy the work in this extraordinary converted church space of the Garden Museum without thinking too far ahead.

Of course, its always fun to have things to look forward to so I am thinking about working along the same lines as the large flowerbed works but in light or neon in collaboration with a friend which could be very cool if it comes together. I am also part of a number of group shows coming up some of which are raising money for a selection of great charities.

The Dalemain Gardens are open from Sunday to Friday, April to October: www.dalemain.com

Get in touch with marketing@dalemain.com to join the Garden Days run by Jane Hasell-McCosh