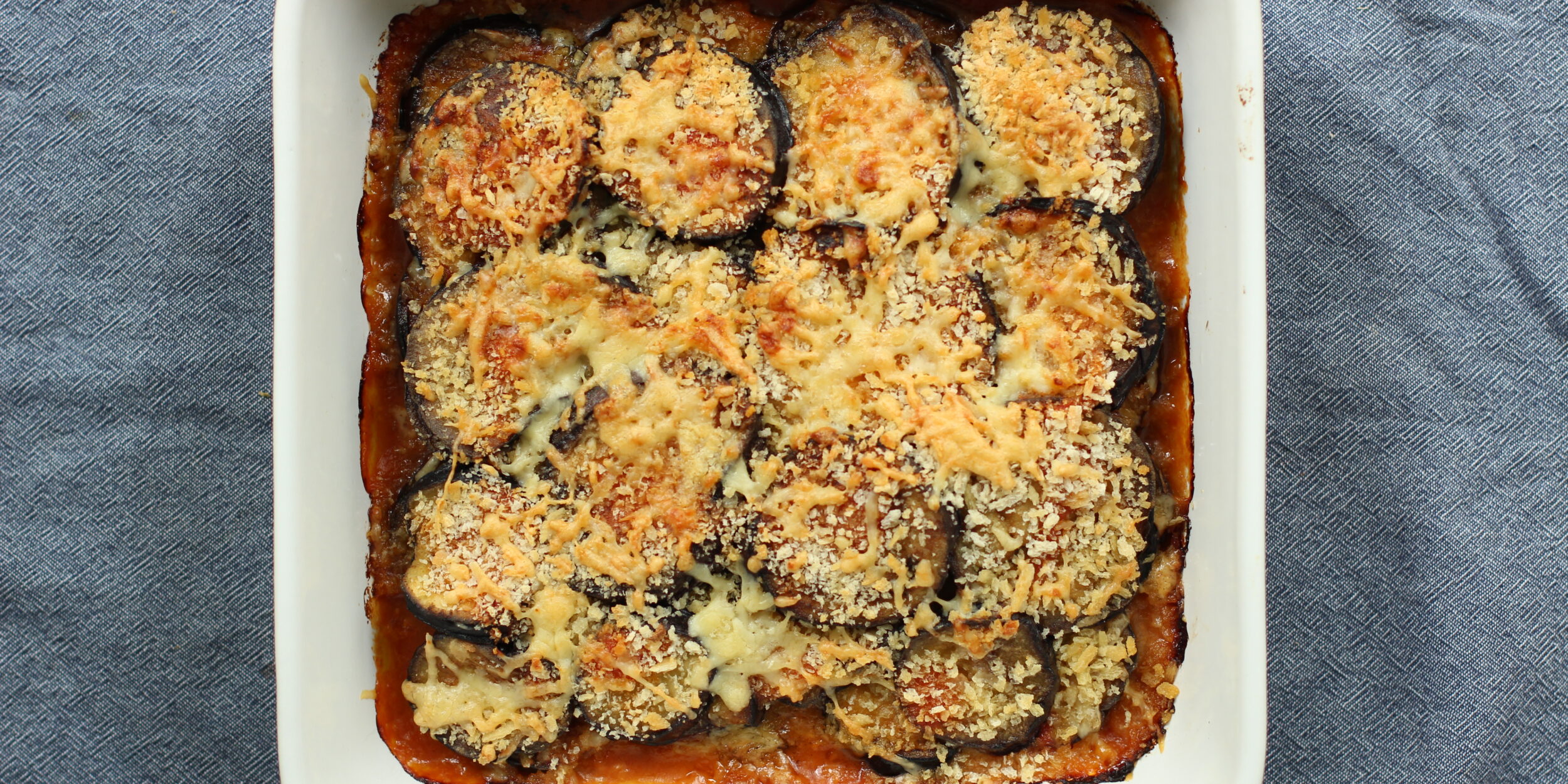 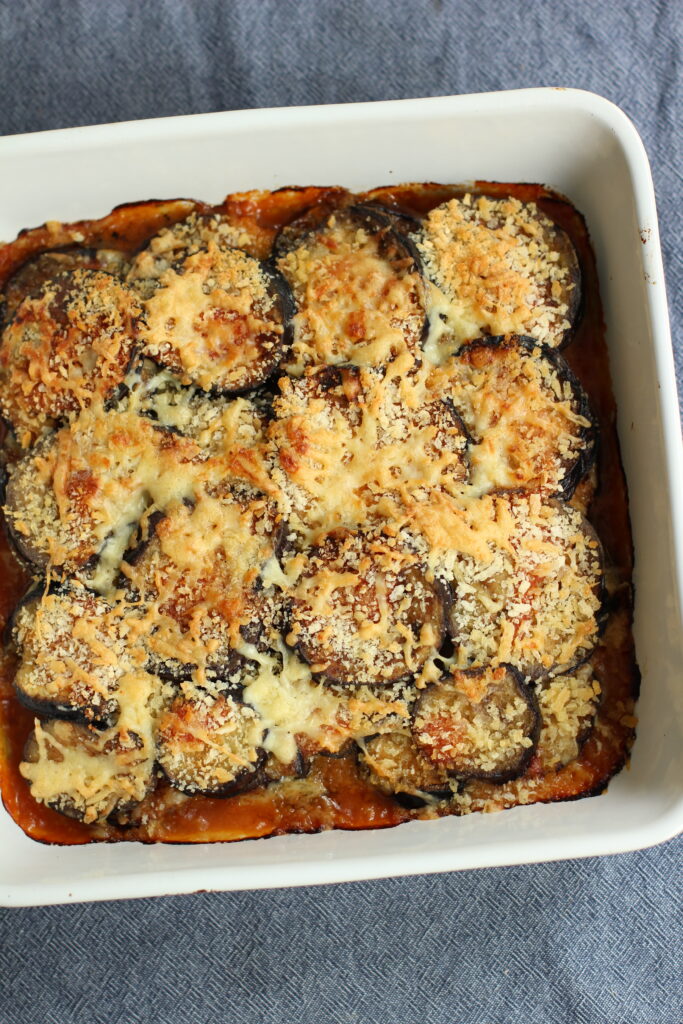 Constance Spry, was not only the 20th century’s most influential floral decorator, but a cookbook and recipe writer too.

In the culinary world she is best known for her co-creation of ‘Coronation Chicken’ which features in her 1956 book The Constance Spry Cookbook. The dish was created for Queen Elizabeth II’s coronation in 1953 with friend and Le Cordon Bleu Paris graduate Rosemary Hulme who co-authored the cookbook. Earlier in 1945, they had also partnered to relaunch a domestic science school which taught flower arranging as well as cooking.

However, it is Spry’s lesser known Come into the Garden, Cook first published in 1942, that I was handed by our curator Emma House, to explore and research for a food-related blog post to coincide with our current exhibition on her life. The book is on display as part of the exhibition. 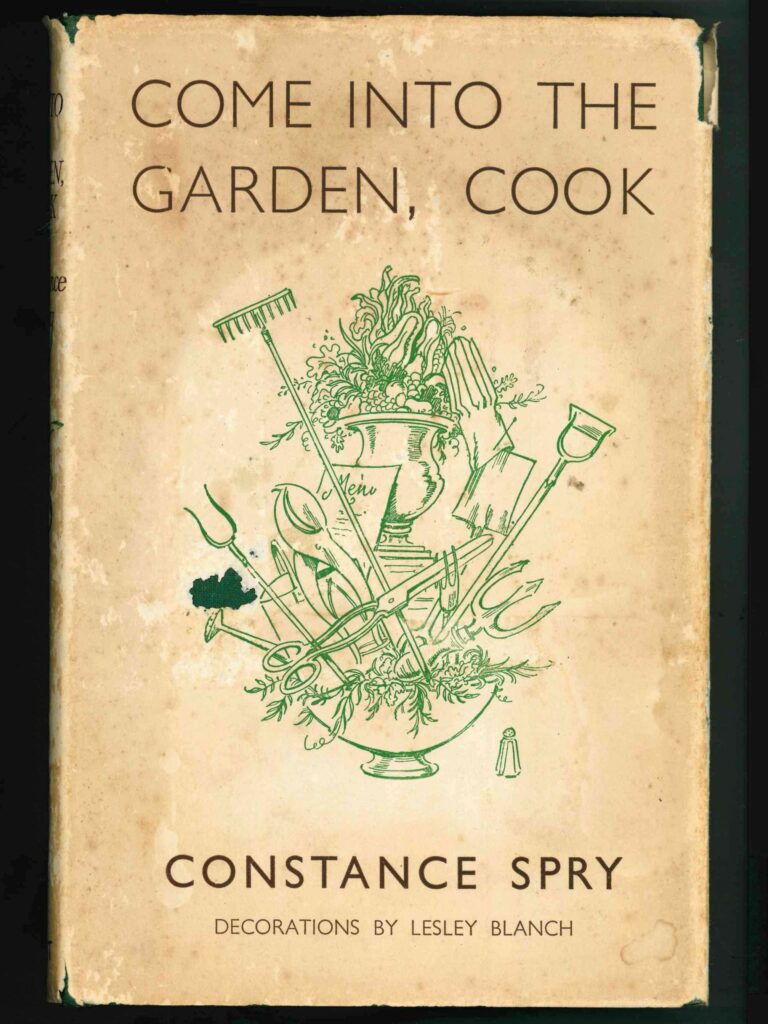 Vegetables are the focus of the book, and whilst Spry was not vegetarian, she championed eating vegetables in order to feel better. Notably this was some 60 years before the Government ‘5 A Day’ message became mainstream! In the opening of the book Spry refers to vegetables as “foods for the gods”.

The chapters group ingredients together into chapters such as root vegetables, leaves & stems, flowers & fruits. There are vegetables you’d expect to see in the 1940s – potatoes, carrots, onions. There are also the more unusual – kohlrabi, salsify and sea kale. Spry notes “If I want to eat a vegetable, I had to grow it” (page 4).

Recipes are woven into Spry’s narrative throughout the main chapters of the book, yet not always given their own separate title. There are no glossy pages, photos, or even illustrations of dishes. Quite different to the aspirational coffee table cookbooks we devour today.

1942 was 3 years into World War II, and so the recipes in the book are obviously hindered by the rationing of the time. There is the use of margarine over butter for daily cooking and scant use of cream. Spry comments “it will be nice after the war to have cream and wine and more butter and sugar, because one can make more and better dishes” (page 16).

As a gardener cook Spry would have had no choice but to cook seasonally, so to accompany this article I decided to cook a seasonal summer dish with aubergines and tomatoes, one that on first reading sounded like something I would definitely enjoy to eat.  This aubergine dish is casually dropped into the text without a title, new page or even a paragraph break (see, bottom of page 67 and continued onto page 68 below). 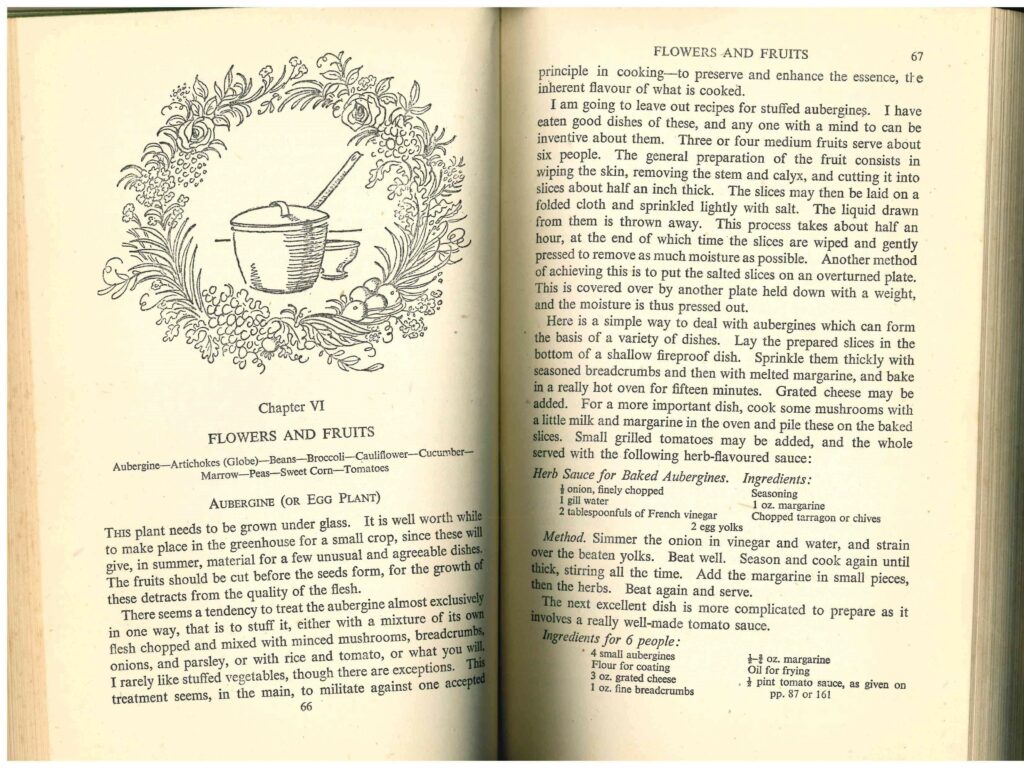 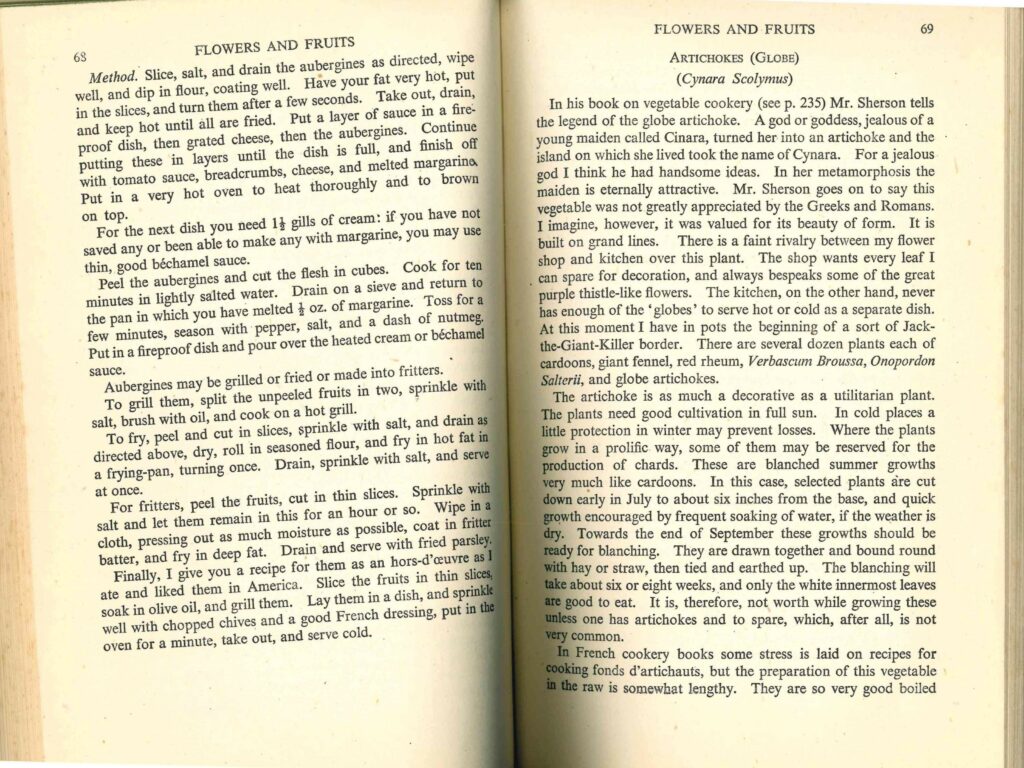 The recipe seems like a nod to cooking from the Mediterranean, and is similar, I think to what is now popularly known as the Italian Aubergine Parmigiana. How would she have known about this? She must have been influenced by a cook she knew, since foreign travel would have been thin on the ground mid war. I’m also quite fascinated by the use of aubergines in the UK as early as 1942, a time when French courgettes and Italian zucchini were thought of as exotic, and 8 years prior to Elizabeth David’s A book on Mediterranean Food, which introduced the British to ratatouille.

I will admit I am not that familiar with other published recipe books of this era to know whether the detail (or lack of it) given in Spry’s recipe is typical of the time. But, I do know it is very different to how contemporary recipe books are mostly written. Less hand holding, less detail. There isn’t even an oven temperature given, nor a suggested size of the baking dish it should eventually go in.

Spry makes the tomato sauce for the recipe from scratch – no popularity for tinned tomatoes in 1942 – and so of course should I. There are two given in the book, I chose the simpler one, a passata style sauce with garlic and herbs. My thyme came from the garden, but everything else – I should be embarrassed to admit to Spry – from a supermarket. 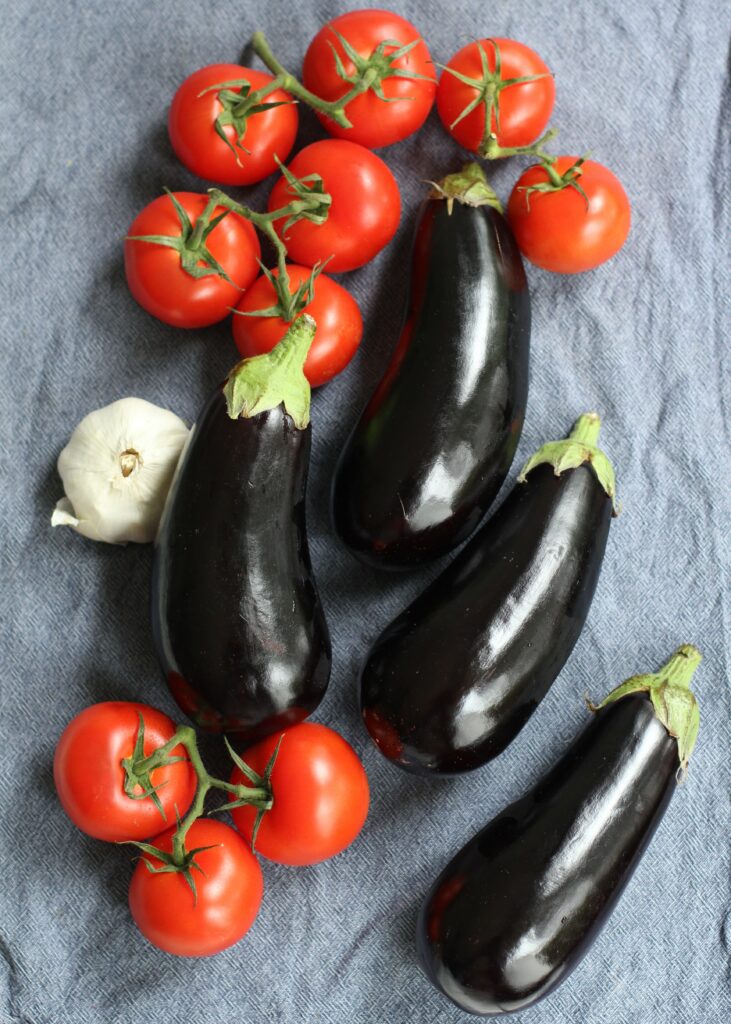 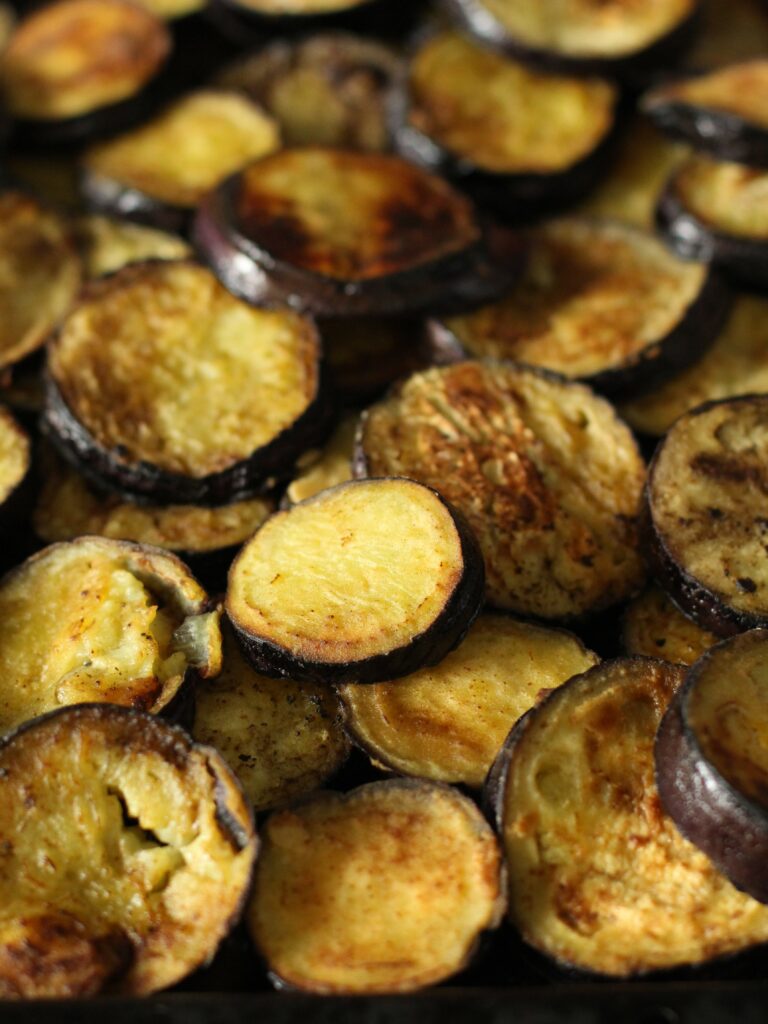 I decided to follow Spry’s recipe and method as much as I could, but also be led by my own intuition, for example the aubergine slices needed at least 3 minutes on each side in the frying pan, and not her ‘few seconds’.  I also opted not to salt the aubergines before cooking, because the general consensus is that no-one bothers anymore. In terms of ingredients I went wild with my quantities of extra-virgin olive oil, used a little more cheese (Cheddar, a little research told me was the likely one) and reverted to butter over margarine – all simply because I could.

The verdict? A very agreeable luncheon, that definitely would not have served 6 as Spry suggested. It could have only been improved by a few tweaks, perhaps some fresh herbs, capers, or a dribble of something acidic to counteract all the delicious oil the aubergines soaked up in the frying pan.

I have written up the recipe to share with the same detail as I would write any recipe for publication or for our food learning classes today, so this is very much my interpretation of, rather than a direct copy of, Spry’s dish. I’ve also given it a title as I think it deserves one. 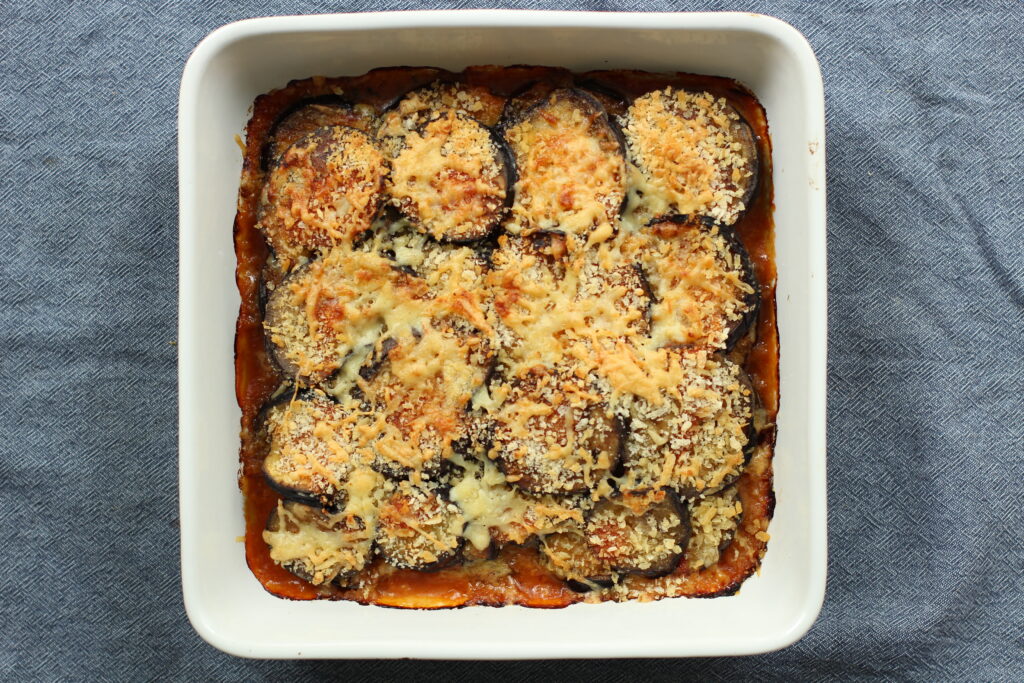 *Alternatively, for speed use shop bought passata, reduced a little with an added clove of garlic / herbs and with seasoning.