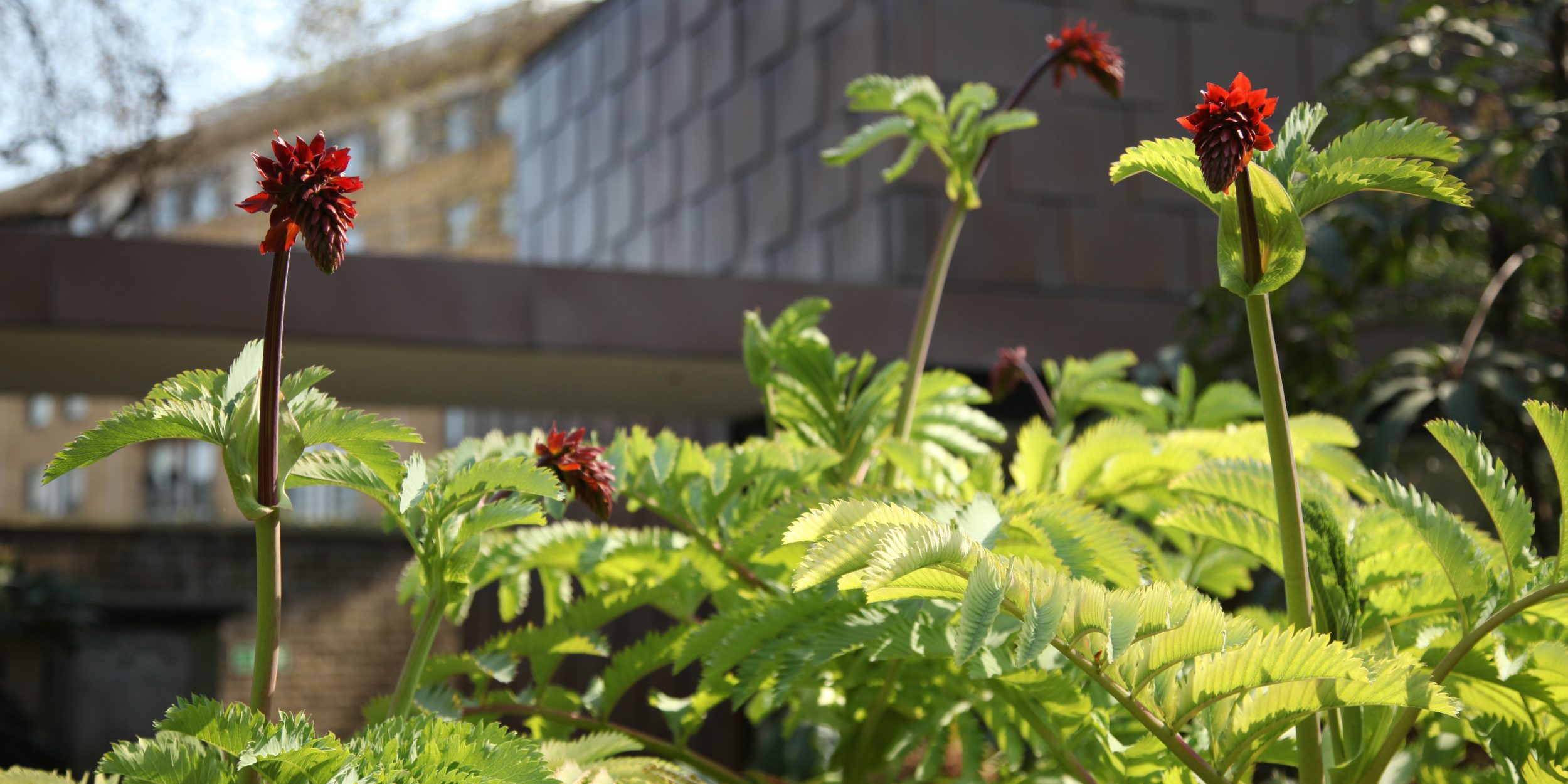 Home » News » An Update from our Director, Christopher Woodward

An Update from our Director, Christopher Woodward

The Museum has been closed for over five weeks. The building, collection and archive are safe and secure, but we miss you: our supporters, visitors, and volunteers. We will reopen as soon as government guidelines allow, and until then – and fingers crossed – we will do our best to share the stories in our collections in this newsletter, and on an accelerating Instagram account (@gardenmuseum).

In financial terms, the impact of the virus is more extreme than any scenario imagined. In the three months between April and June alone we will lose £265,000 in income from admissions, retail, venue hire and public events. As we receive no public funding, our only income is subscriptions and donations from our Friends and Patrons. So we are all the more grateful to those of you who have renewed, our joined. At the end of March we had our highest number of Friends ever. And we are also grateful to everyone who has rung or emailed to ask ‘How is the Museum?’ This letter is the first in a weekly update of news.

One dawn in the summer of 1693, Dr William Oliver was called from his cabin on HMS Albermarle, a Mar of War sailing across The Bay of Biscay. A young sailor was held down by four comrades, whom he cursed in between crying out that ‘he would go into the green fields; his looks were as furious and wild as those of a Lyon…’

The man had been found about to throw himself into the sea, believing he saw cool, grassy meadows. He was bled by the surgeon in three places, and ‘his Ravings and crying after Green Fields left off, his wild Looks much abated’, and he fell asleep in his hammock. Waking, the hallucination was forgotten. Dr Oliver shared this experience in a letter published by the Royal Society in 1704. In The British Medical Journal of 1909 a ship’s surgeon shared a very similar story of what the profession called ‘calenture’: that is, to imagine in a fever that the ocean is a meadow. A young sailor in the Pacific was caught at the rail about to jump. He explained that ‘he saw his sister in a green field gathering flowers, and was climbing over the gate to go to her’.

In these days of lockdown I am experiencing a strange, reversed form of ‘Calenture’: in the Museum garden, picking flowers, but as if afloat in an empty sea. The garden is looking at its most beautiful. But no one is here to see.

Five years ago we closed to build the new Museum. In the eighteen months of building work which followed what I had not expected was just how much of the energy required to deliver the project came from physical proximity to Friends, to audiences. In the silence, every task feels heavier. It takes just a phone call, or to bump into a couple of Friends in the street, to make all the difference to the day.

Up on the whiteboard in our office are written in felt-tip over fifty events between April and June: more than  twenty school visits; cooking events from ‘Beyond the Bun’ to ‘Mauritius’, as our Food Learning Officer Ceri Jones has written, intriguingly. A Symposium on Elizabeth’s Minister Lord Burghley as a patron of the arts, and gardens. Talks on the artists of our ‘Sanctuary’ exhibition (being packed up this week) and on John Singer Sargeant in the garden, workshops on bee-keeping and peas. Garden visits. Our Literary Festival.

It’s hard to wipe down the board, as it feels like wiping away so many faces, voices and hands held up by the children who come to study plants. (And all these events will take place this autumn, or in next year’s gardening season: thank you, again, to everyone who has tickets for being so graceful in waiting). But the diversity of programming embedded in these felt-tipped names also strengthens the resolve to do whatever it takes to keep our talented team together and be ready for our visitors to return.

Of course, the biggest challenge is cash. As we have no public funding, or founder’s Endowment, we have to generate 100% of our income. This year, it was at record levels. But the busier the arts venue, the greater the impact of the virus. Three-quarters of our staff are on Furlough, staff under the government’s incredibly generous Job Retention Scheme. The remainder of us have a 20% reduction in salary. We have put on hold every project we can, but are continuing with our exhibition of Derek Jarman’s garden which will be installed in readiness for re-opening. (Right now the catalogue is rolling off the printing presses in Wales).

What else is happening? What can happen online is quite wonderful. We have been sharing unsolved mysteries from our photographic collection, and last week Jennie Webber re-imagined her Wildlife Drawing Classes which occupy the Clore as a join-in Instagram session. Today artist Katie Spragg continued our Clay 4 Dementia programme through Zoom: our supplier of artists’ clay delivered to a dozen doorsteps across London. 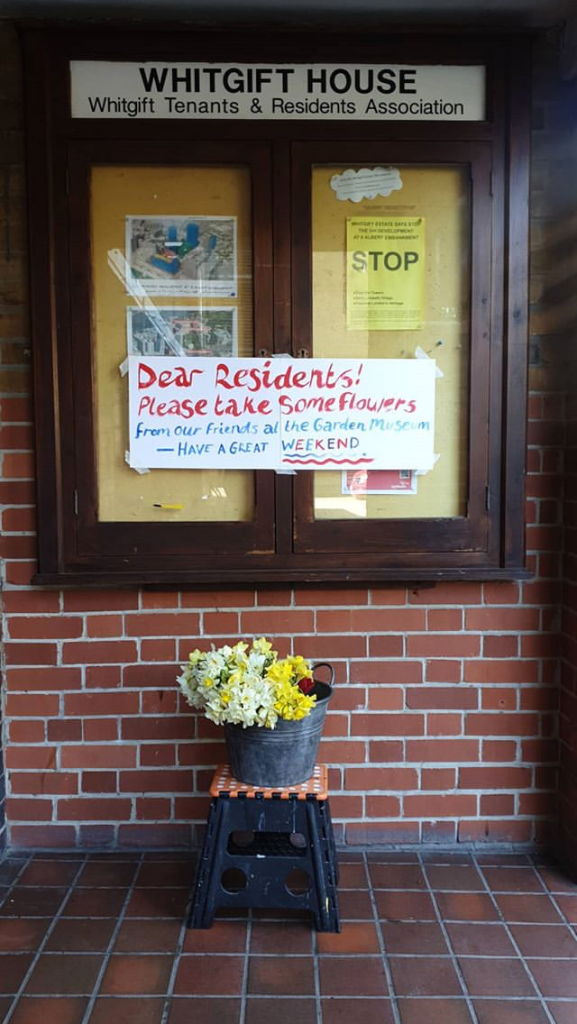 Matt Collins, our Head Gardener, is taking buckets of cut flowers from the garden to the staircase of Whitgift House, where our neighbours, many elderly, are living in isolation in flats without balconies.

But if you do one thing in horticultural isolation, read The Well-Gardened Mind by Sue Stuart-Smith published this week by William Collins (yes, its launch at the Museum this week is scribbled up there on the Board). Sue is a psychiatrist and psychotherapist, and first spoke on this subject when she and her husband Tom, our Trustee, hosted our Festival of Garden Literature at their garden at Serge Hill, close to St Alban’s. That was our first Festival; in fact, as I recollect it, we dreamt up on their sofa on New Year’ Day. (Why not do a Festival of garden writing? And why not in a garden? Your garden?).

The talks were divided between meadow, dairy and metal shed, and when Sue finished her talk in the shed with the suggestion that Miss Havisham should have got out her shears to dead-head her garden heaped-over in self-pity, the corrugated iron reverberated with the applause of an audience who recognised a voice utterly new, utterly convincing, in its perspective..

The Well-Gardened Mind is one of the best books ever written about gardening. But it is much more than that. It’s an examination of our relationship with the deepest twitches of Nature, and why we need a cultivated place which mediates between the inner self and the wide world beyond. A place which is contained and safe; in which as we dig we travel far within and without ourselves; and where we can enact rituals of change, care, and laughter. And which we call a garden.

The book takes us back to the gardens of Egyptian burial, to American prisons to the sand-shore garden on Provincetown, Cape Cod, in which the poet Stanley Kunitz worked out for himself the ‘interplay of forces, both human and natural’ which make a garden. In 2003 he was in hospital and he believed that it was his wish to see his garden again which kept him alive.

The Well-Gardened Mind is so beautifully written that it has a hundred scenes you want to share. But what falls open today is her account of plant-collector James Douglas arriving on Vancouver Island in 1843. After dreary shores and dark forests, it was ‘a perfect Eden’ of oak trees set in meadows of blue camassias, the wild hyacinth. But, Stuart-Smith tells us, what Douglas assumes was wild was a place of annual ritual, for the Lekwungen tribe of the Coast Salish people burned the ground burned to protect the camas, whose bulbs were cooked as a delicacy in the seasonal feasts. And then the Hudson’s Bay Company, who employed Douglas, banned the burning of the meadows, and they were choked by shrubs. They did sell the camas bulbs to English gardeners and Sue writes:

‘they grow in our garden at home and each year their flowers bloom for two or three weeks just as spring turns to summer. I always mourn their passing, for their tall, elegant spikes really are a heavenly shade of blue’.

The Well-Gardened Mind by Sue Stuart Smith is out now.