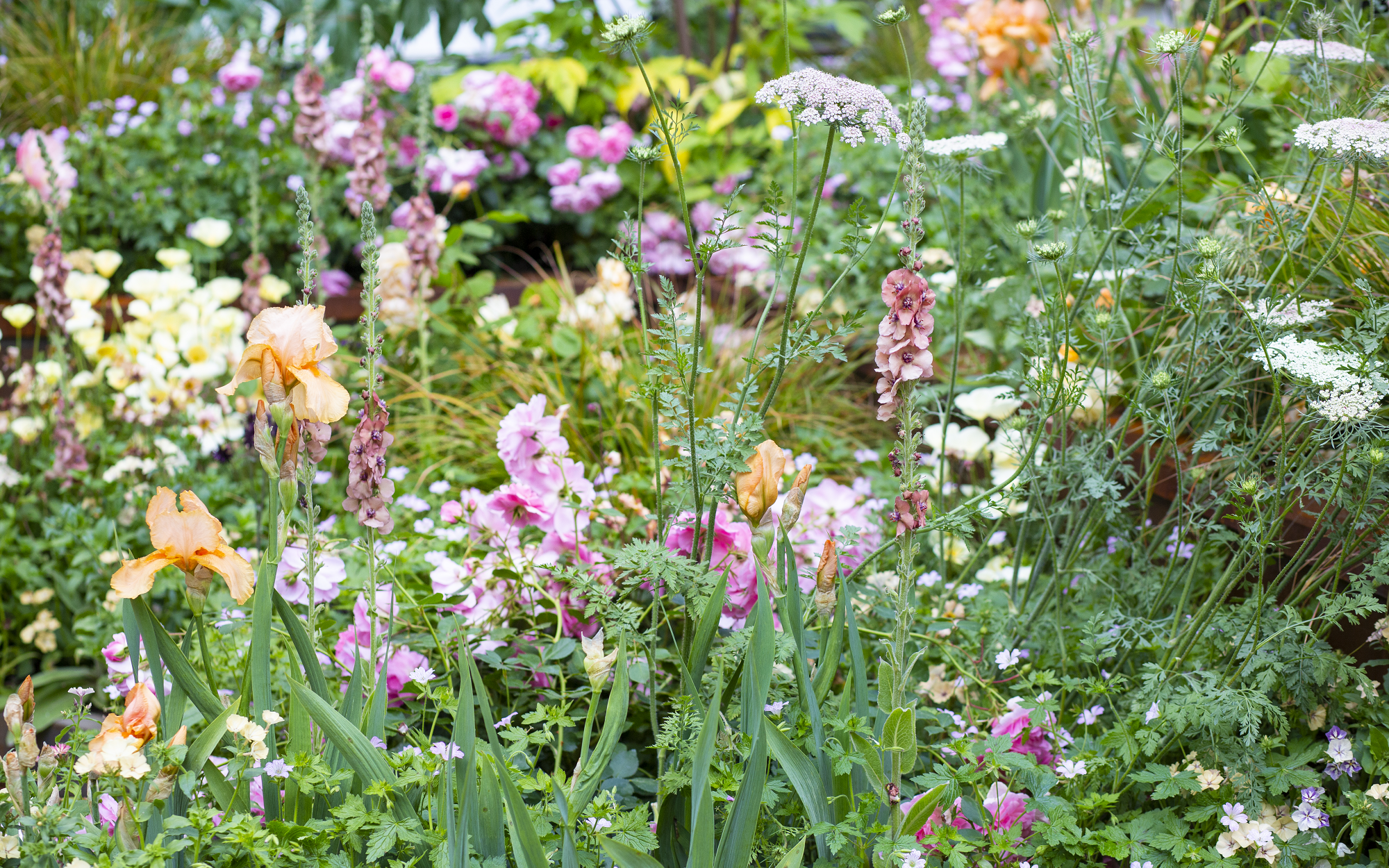 An extract from The Gardener’s Palette by Jo Thompson

Garden designer Jo Thompson’s new book ‘The Gardener’s Palette’ explores how colour can set the mood of a garden, and how to pick the right plants to fulfil your vision. Ahead of her book launch in conversation with Rachel de Thame on Tuesday 7 June, Jo has shared an extract from the book:

Colour exists. It is an entity that scientists will say is the result of reflected light. For the purposes of this book, colour is very much a “thing,” and each colour, each tone and hue, are real. To me, colour exists not only as an entity but also as a sentiment. Experiences, memories, all form associations with colour; one person’s lilac is another one’s mauve. I have never been quite sure what mauve is—I had it down as a purple, but others will confidently point towards a pinky blue.

And it’s not just me. People have been wrestling with colour for a long time: how to define it in words, how to capture it in form, how to harness it in thought, how to apply it in our world. Is it subjective, is it objective? How can we see it as a whole when—although it may seem material and our experience of it physical—it is in fact simply sensory and cultural, according to our lived experience?

Theories on colour go back as far as Aristotle, with layers of meaning as many in number as the 346,000 to even 17 million colours that are thought to exist. From Dante and Leonardo da Vinci through to Goethe and Braque, artists, philosophers, scientists, and writers have all contributed to the investigation of colour, its theory, its psychology, its application in art, culture, and science.

The first record of a colour chart to describe plants and animals dates from 1686, when Walter Charleton created a system of five primary colours (white, black, yellow, red, and blue) and five secondary (green, purple, grey, brown, and bay), with further subdivisions relating each to colours of the natural world for example, “yellow like the yolk of an egg.” Isaac Newton, he of the colour wheel, presented colours, seven in number, to fit in conveniently with the number of notes on a music scale and generally with the Classical notion of seven—although in Canto 29 of his Purgatorio, Dante had already preempted Newton by over 350 years: “I saw the flames advance, leaving the air behind them tinted, and they had the appearance of trailing banners, so that the air above remained coloured in seven bands, of the hues in which the sun creates his bow.”

Specifically, this book concerns itself not just with colours in the garden but the meanings and effects
created by them and their interactions. Once, a few miles outside the walls of Siena, I entered another walled city: a city of self-sown trees and brambles growing over the picturesque remains of a nineteenth century park designed by Agostino Fantastici, now left to crumble. This garden, the secret garden that everyone dreams of finding, was marked by a rusty old gate that was easily pushed aside. I could just pick out the forms that shaped the garden and the routes around it; glades and grottoes were discernible by the shades and layers, and as I looked more closely, I realised that the greens and greys and browns were speckled with yellows and oranges, reds and pinks. But these weren’t coming from flowers: they
were the result of light and shadows as they played on different surfaces.

Moods changed from gentle to brooding as I explored further, moving from bright glades into darker areas; the atmosphere was sometimes still, sometimes full of a sense of what had gone before as leaves started to rustle and their colours flickered. What had clearly once been tamed lawns in one shade of emerald were now wild, in a thousand shades and hues of green. I wondered to myself, is it just colour which creates atmosphere? Or is it so tied up with other elements—location, light, climate, one’s own cultural references—that one person’s romantic is another person’s tepid bore?

Colour is as much about perception and position as it is about light, whether in gardens or painting. The
primary colours of light are red, blue, and green, but over the centuries, painters gradually reduced colour to three primaries, red, blue, and yellow, from which, it was thought, the whole range of colours could be generated by mixing—rather a daring approach, as it had long been thought that nature should not be interfered with by man. The Impressionists exploited light, and as for colour, Monet called it his “day-long obsession, joy, and torment.” For Gauguin and van Gogh, colour could create both order and chaos, simultaneously, and Matisse believed its chief aim was “to serve expression.”

When we observe and consider assemblies of plants in gardens, we are to a large extent considering colour. Looking at each creation featured in this book, it quickly became impossible for me not to reference the understanding of what artists have spent a lifetime developing. This is not to say in any way that any of the plantings here are a direct, or indirect, study of a certain painting; rather each is a demonstration of how colours work together and how different people see them and translate them in different ways.

Some gardens in this book have a piece of art referenced or shown. I haven’t included a comparison for every planting; nor have I attempted to force an explanation for the reasoning behind the inclusion of each piece of art—for one reason or another the specific piece came to mind and I simply share a train of thought. You may be able to see the reference clearly or just get a sense of where a similarity may be. But I’m not going to push an issue. The combined warmth and coolness of the light, the perceived atmosphere, whether of garden or of art, is simply how I see it. It may not be how you see it. And from there, so many questions arise.

What is a specific colour? How to define the colour of a tree trunk that forms a key part of a planting
combination: do we ignore it and work despite it, or do we embrace it and use it to inspire the colours around it? And then, how to combine them to create a picture which changes minute by minute depending on the weather, the season, the temperature, the light? The colour wheel, applied so frequently in our first lessons on the use of colour, may spring to mind here. But I have a confession to make. I have never understood the colour wheel. I understand the principles and I understand Newton’s arrangement of colour, but as far as colour in the garden is concerned, I think it constrains us. Why, for example, can’t we use “cool” and “warm” colours together, when they may work so well to create a certain effect.

Jo Thompson will be in conversation with Rachel de Thame to celebrate the launch of The Gardener’s Palette, on Tuesday 7 June at 7pm: book tickets

All images by Rachel Warne