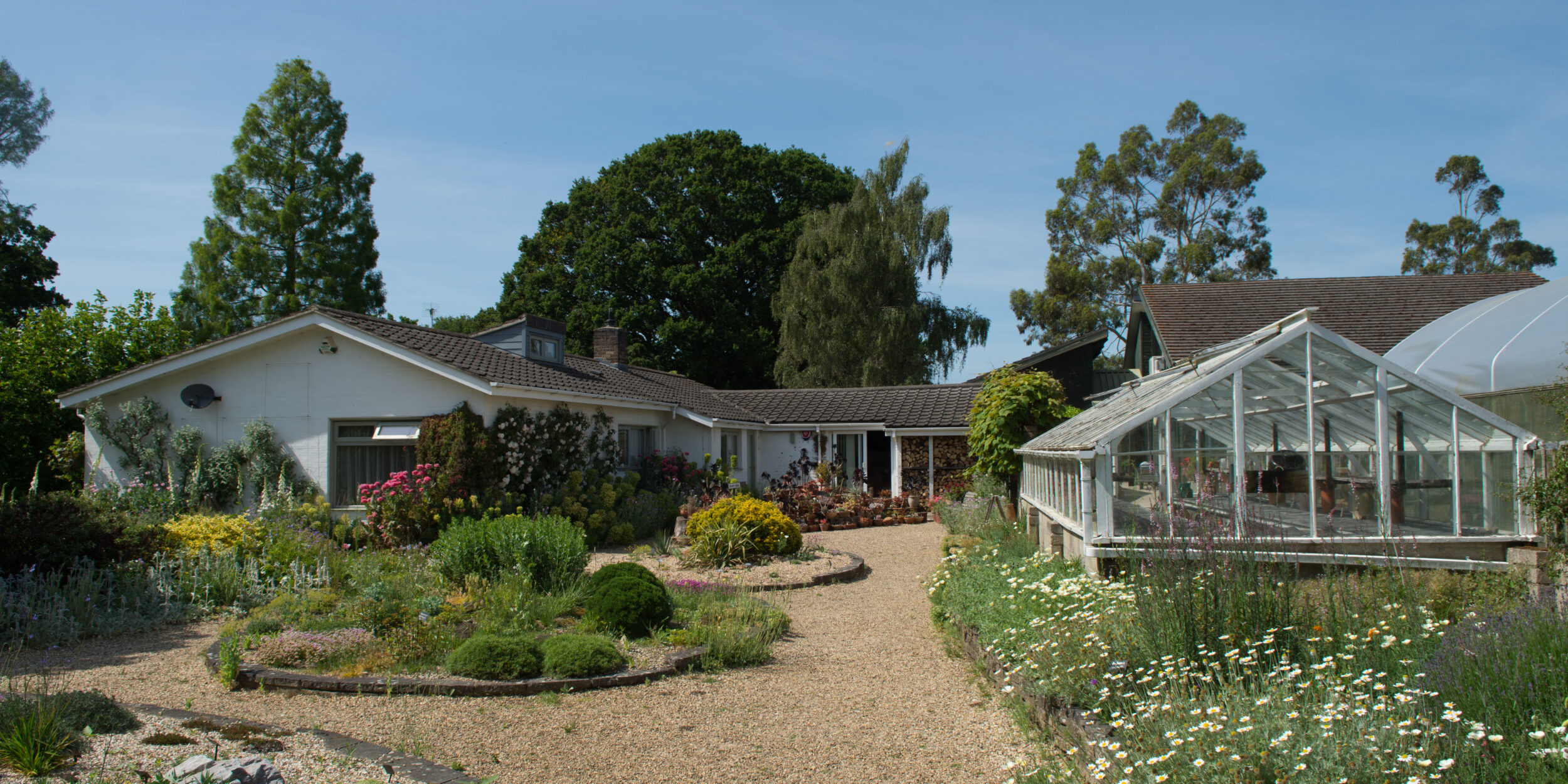 Home » News » A visit to the Beth Chatto Gardens

A visit to the Beth Chatto Gardens

To catalogue a personal archive you need to find out as much about its creator as possible. If you’re unlucky you may only be able to find a few published sources, such as an obituary or a mention in a book. However, people leave behind all sorts of things, and documents are only part of the story.

The largest part of Beth Chatto’s legacy must be her gardens and I was lucky enough to visit them recently with colleagues from the Garden Museum. I was very much looking forward to seeing how the gardens related to the material in the archive collection. Despite purposefully not being frozen in time, the Beth Chatto Gardens are a historic record in their own right, with traces of their past still visible if you know where to look. Where the archives can be viewed as a series of snapshots (sometimes literally) that can inform the understanding of the gardens, the gardens themselves provide the structure to understand how these diverse documents fit together.

The story of the gardens is well known: in 1959 Beth and Andrew Chatto built a house and garden on scrubby wasteland that was unsuitable for farming with the dry gravelly soil at the top of the slope and the spring fed ditch which never dried out below. Looking at the gardens now it’s hard to get a sense of the original landscape: the ditch is now a sequence of ponds surrounded by damp loving plants and green lawns and the dry gravel has been transformed into the famous gravel garden. 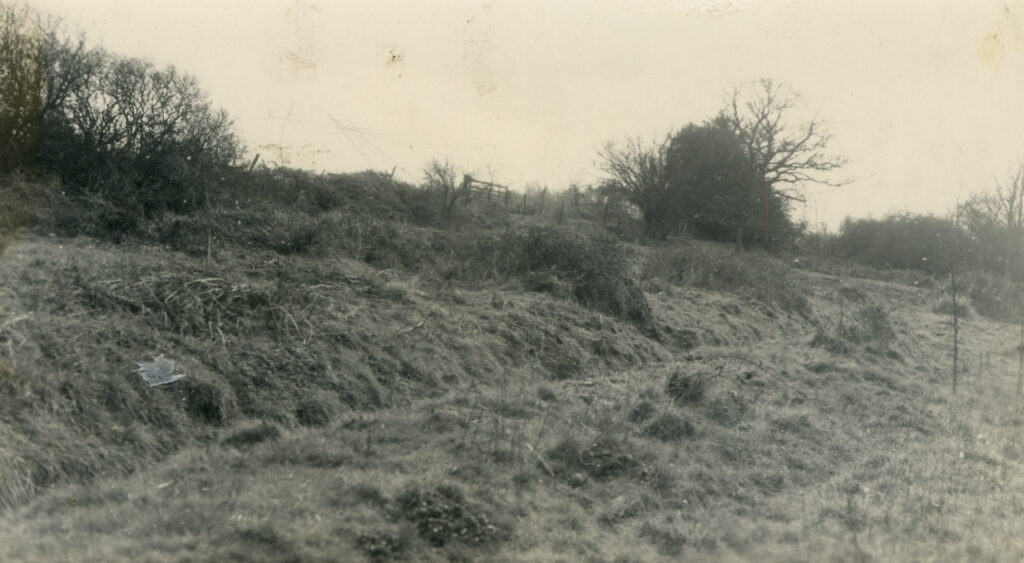 However, there are a few tiny photographs in the archive which show the land as it was and demonstrate the scale of the transformation. The gardens which first opened to the public in the late 1960s were already the result of years of development.  Even before the house was finished, work started on clearing ground, improving the soils, and landscaping the different areas.

In the early days the Chattos still owned and ran the fruit farm which surrounded the land and were able to arrange for some of the farm workers to help with the earthworks, but they also did a lot of it themselves. Beth was particularly proud of the patio and steps they created, having been involved in pouring the concrete and laying paving stones and cobbles. These are the same steps you see today in the garden, providing access between the original dry and damp gardens. 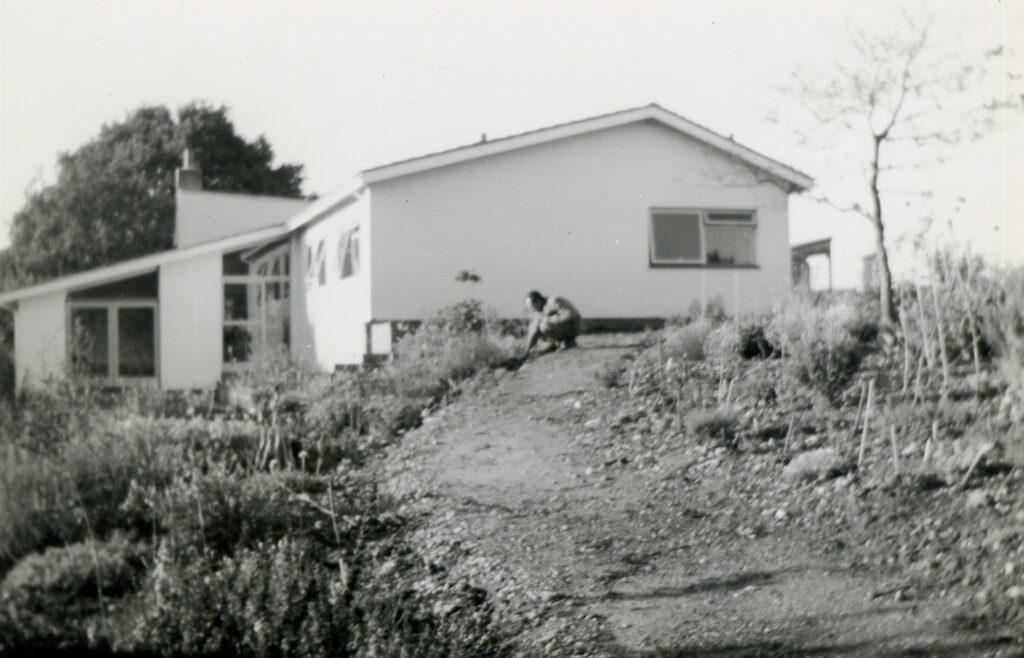 While the bones of the garden were mostly there from the start, the planting has developed and matured as the site has expanded. We were fortunate to be shown around by Nursery Manager David Ward and Head Gardener Åsa Gregers-Warg, both of them worked with Beth for many years and have played a key part in the evolution of the gardens. After reading so much about the gardens from Beth’s point of view it was interesting to talk to other people who know it so well. What came across strongly was how her planting ethos still guides the development of the gardens without stifling Åsa and David’s ability to make necessary changes or introduce new plant varieties as they become available. Beth was open to new ideas but was not one to pick them up wholesale, instead she would consider what she had seen and what elements might work in her own garden. Her notebooks are full of observations with notes for discussion.

Our questions about whether there were still examples of her famous triangular profiles to be seen raised a smile as they pointed out examples in every bed. I was also very curious about her process for laying out the planting. There are hardly any garden plans in the archive and I wanted to know whether this was because they had been lost or if they had never existed.

It turns out that Beth didn’t use garden designs because she didn’t need them. She famously laid out the beds for her garden using hosepipes, able to adjust them as needed on the actual landscape. Likewise, having the nursery just next door she didn’t need to plan for plants, she knew the site conditions extremely well and would wander around the relevant sections of the nursery picking sprigs from plants to hold together to see how the shapes of the leaves interacted. Then the team would load up the trolleys and take the chosen plants to set them out in the beds ready for planting, returning the extra to the stock beds.

We were also shown behind the scenes: the stock-beds and polytunnels and the new potting house which I was sad to find had replaced the extensive vegetable garden. The caravan, which was the temporary home for many students and staff, is also gone, although Åsa and David remembered it well. They had both been resident there when they were new to the gardens; David in the early 1980s and Åsa in the 2000s.  Accommodation was extremely basic with little heat, Åsa remembers having to move out over winter. She also recalled the rubber snake which I’d spotted in a couple of photographs. She’d attempted to use it to keep the cat out of the caravan but Beth soon appropriated it to keep the birds off the vegetables.

The garden was captured by many outstanding photographers but, while Beth was often effusive in her praise for them, she would always remind them that the garden was not static, or fixed like a painting, it was constantly changing and evolving, with the seasons and over the years.

Despite this, she kept many of these photographs, but equally treasured those snaps taken by visitors to the garden and sent to her with notes and cards, which can be a mine of information. 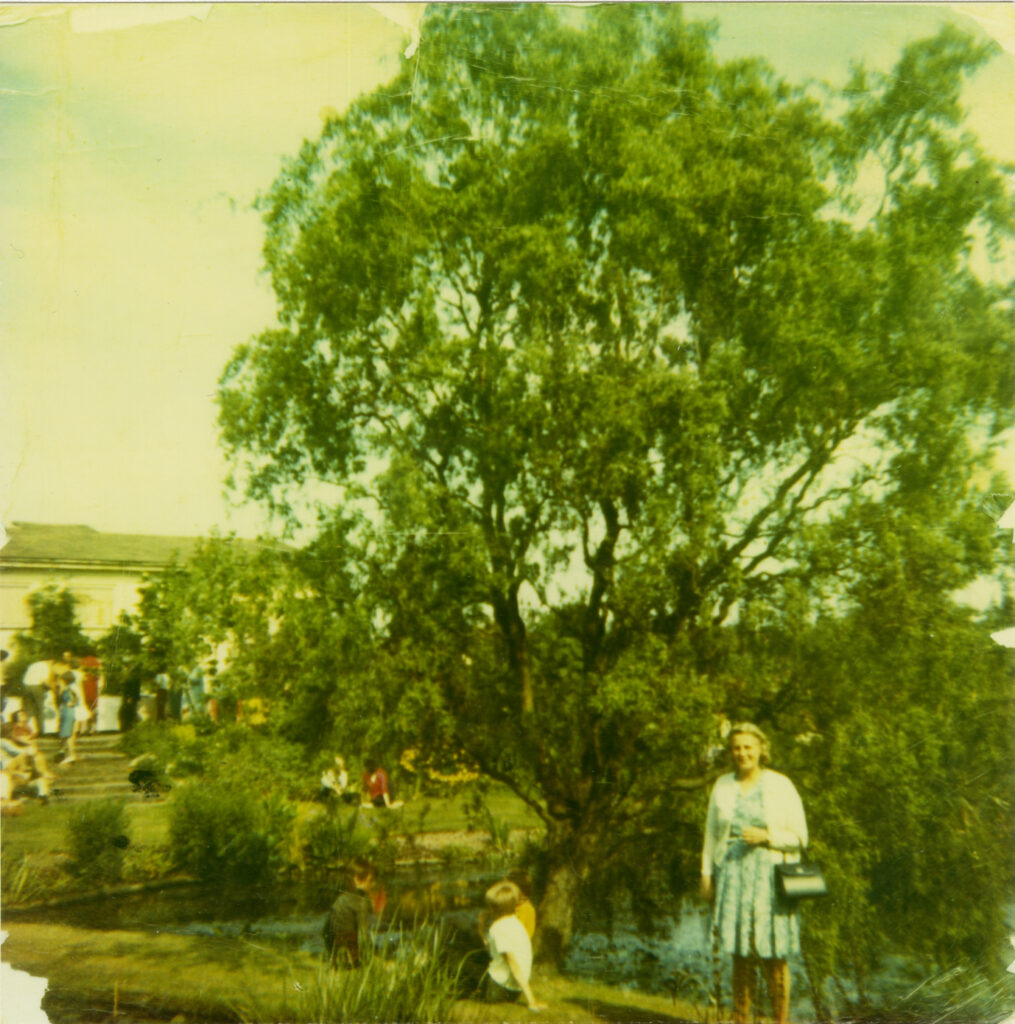 While photographs capture only a moment they can still add to the story. The Gravel Garden was created in 1991 on what was the visitors’ car park, but it’s interesting to see that Beth had been experimenting with growing many of the same plants nearby for decades, as can be seen by this photo of the road to the house which runs alongside it.

Beth’s home is still a private dwelling and not open to the public. Julia Boulton, Beth’s granddaughter and the Managing Director of the gardens was kind enough to let us see inside. While it is obviously a working home, not a museum, it’s remarkably unchanged since she died. Her desk seems as though she’s just stepped away. 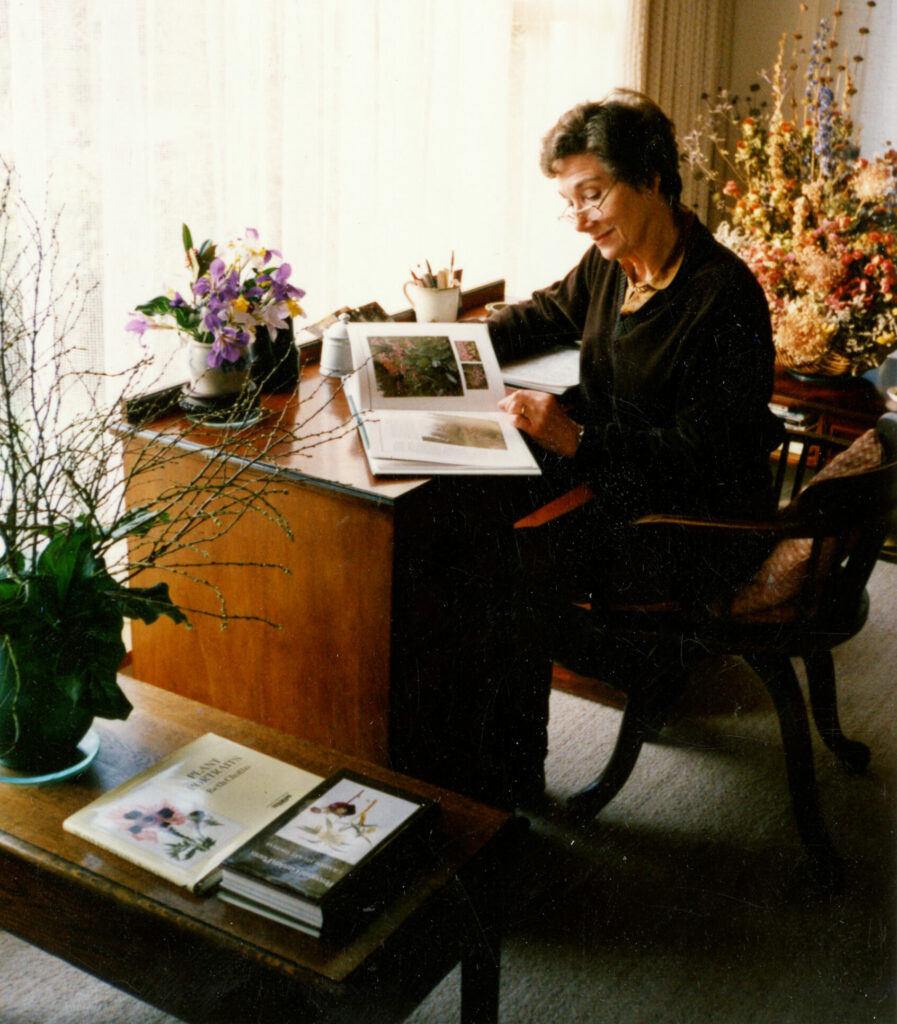 While Beth was well known for her hospitality, often cooking lunch for her visitors, the house was very much a family home, with the grandchildren coming to stay over the summers. Despite Beth working almost every day, she kept to a strict schedule, appearing at set times for tea breaks and lunchtime and stopping in time to cook dinner.

White Barn House was commissioned by local architect, Bryan Thomas, to suit the specific needs of the Chattos. Completed in 1960, it was modern in its day and unique enough to attract comment in its own right. There is a detailed article in the archive, complete with pictures of the rooms, including the open plan, split level living area. 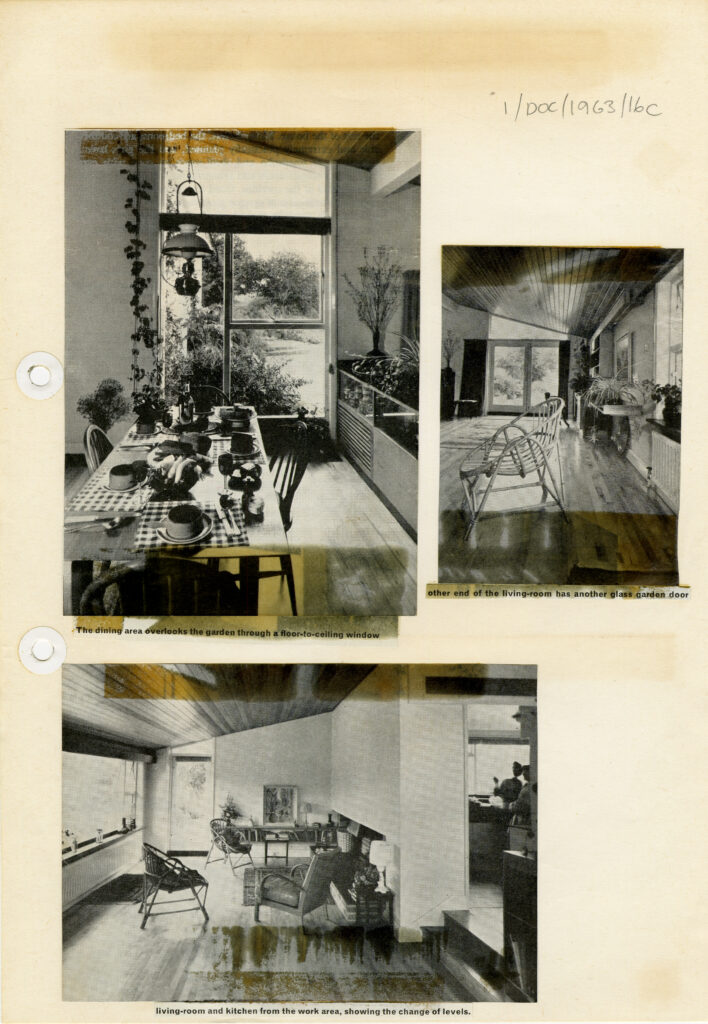 Many of the original features seen in the magazine remain but in the 1980s Beth updated the interior, putting down carpets and replacing the wicker armchairs with pink sofas. Julia remembers thinking as a child that the original furniture was old fashioned and being relieved when her grandparents updated their look!

The visit made me realise that the gardens and the archive papers offer different but complementary records of Beth Chatto’s life. The gardens are an entity in their own right, but ever changing; in comparison the archive is fragmentary, but provides a fixed historic framework for those changes. Both are worth looking at in their own right, but looking at them in the context of each other has increased my appreciation of both. 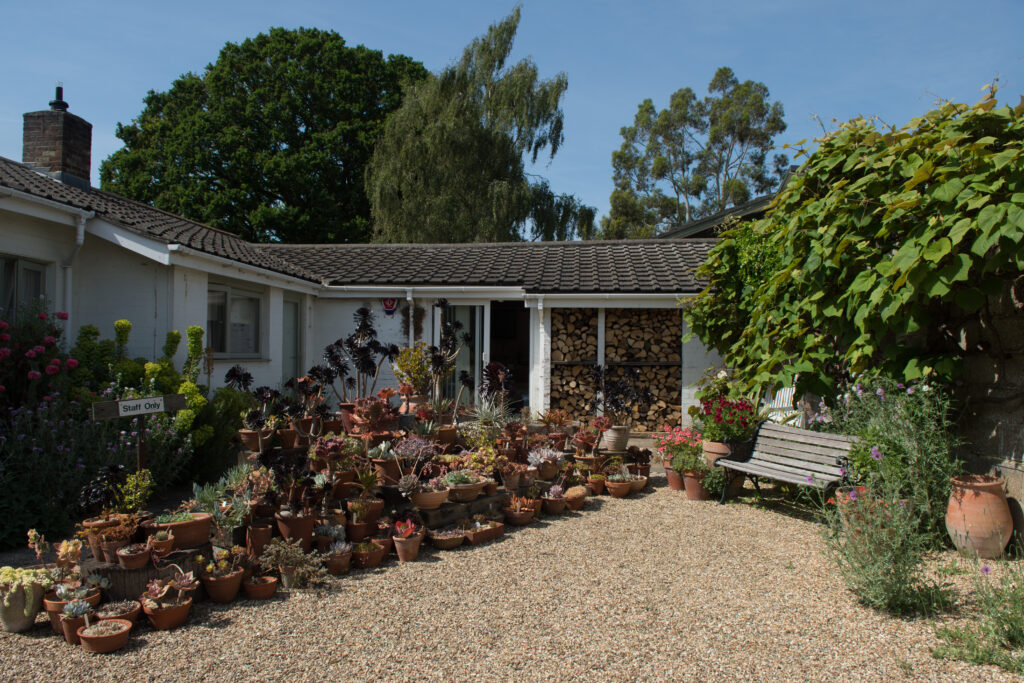 All images are from the Beth Chatto Archive at the Garden Museum, © Beth Chatto Estate apart from the 2021 photos which were taken with permission of Beth Chatto Gardens. Many thanks to Julia, Åsa, David and Karalyn for their hospitality.