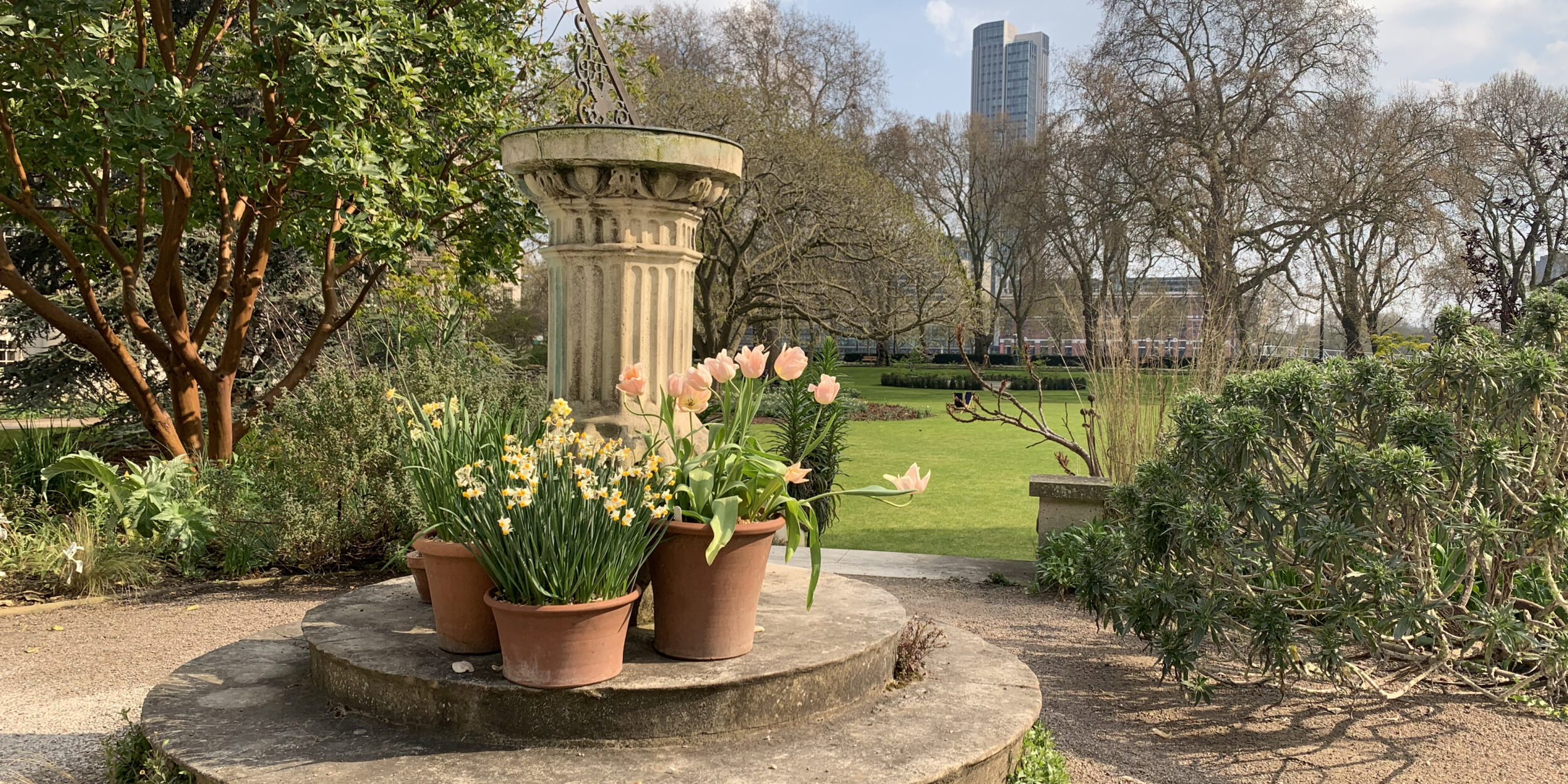 A visit to Inner Temple Garden 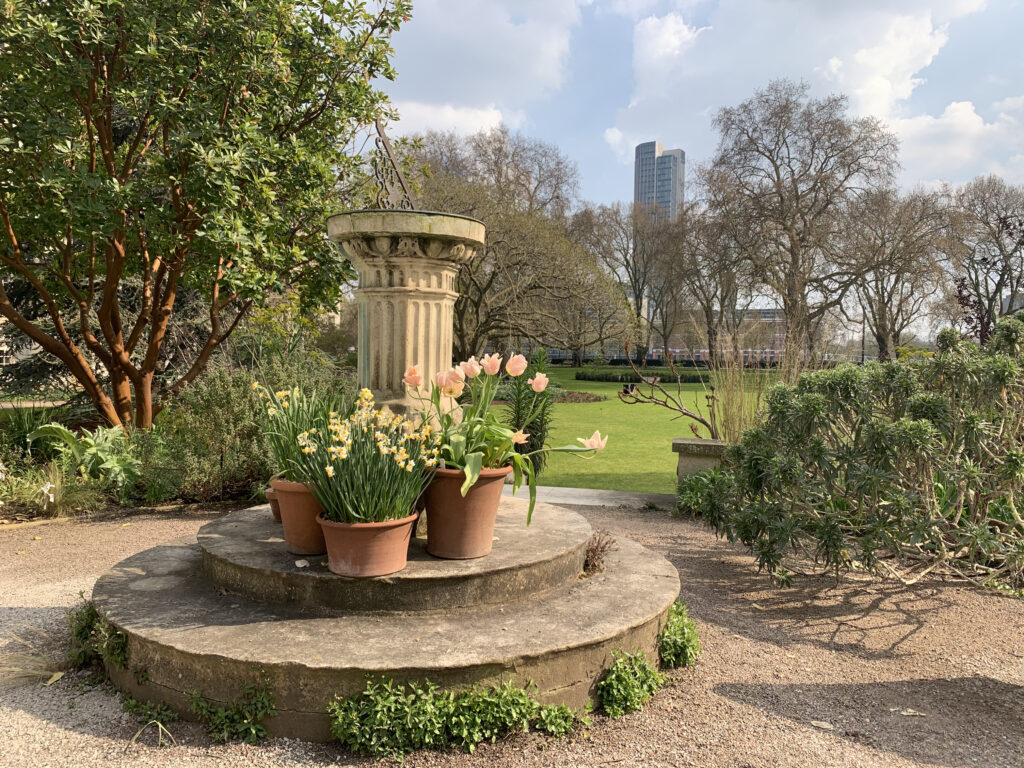 Earlier this month I hopped across to the Northern embankment of the River Thames, spending a few days at the Inner Temple Garden. Despite such a central location, the Garden is remarkably enclosed: a hidden green oasis in the City of London.

On arrival you are greeted by a vast expanse of (perfectly manicured) lawn gently sloping down to the river. A landscape one would normally associate with a country house, yet all the more impressive considering Blackfriars station is but a few minute’s walk away. The grounds are scattered with handsome trees, including Prunus sargentii, Magnolia and Gingko to name but a few. And, of course, the Garden plays host to several mature London Plane trees, as we do at the Museum, which have battled on through the unseasonably high winds of the past week, with some shedding of broken branches and old wood.

Interestingly, as I found out during my guided tour with Head Gardener Sean Harkin, some of these Plane trees can help to tell the history of the site. Trees positioned to the north of the pond area mark the boundary of the garden before the embankment was constructed and the river confined in 1870. The Garden was thus enlarged with the land reclaimed from the Thames. It seems hard to imagine the river significantly wider than we find it today, particularly when standing in the garden where water would once have flowed. Indeed, the site itself is steeped in history, with references and records of gardens and orchards dating back to the 12th Century. 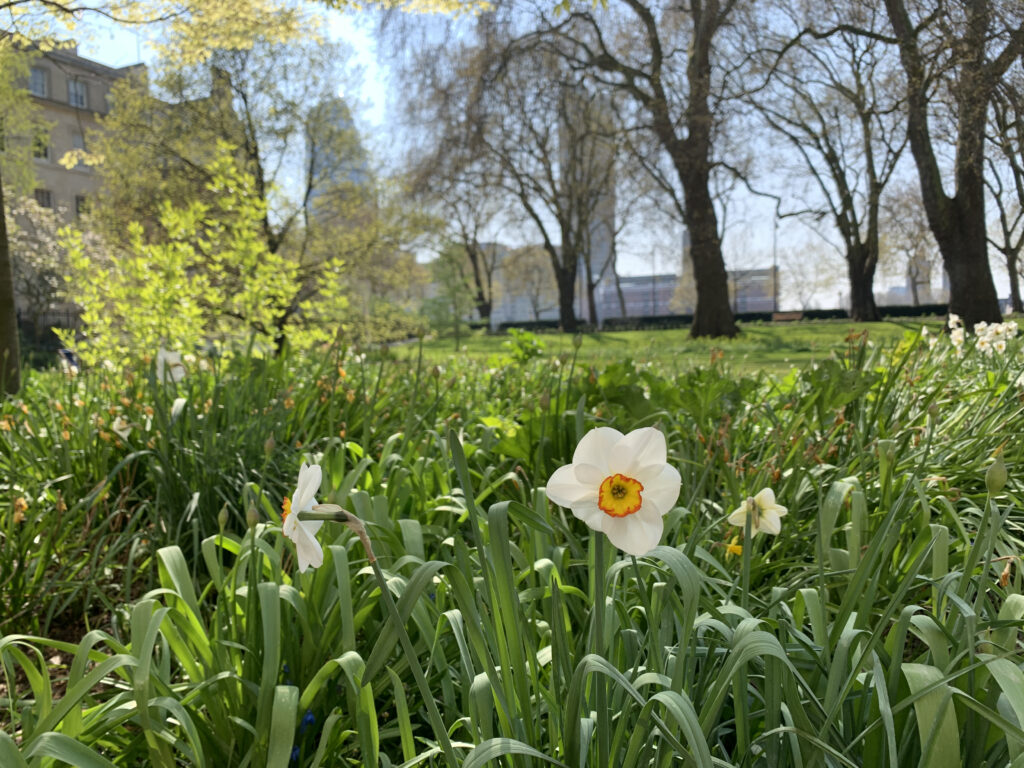 The wonderful team, led by Sean and made up of Sophie, Emily, Rekha and Sam, have been embarking of a series of projects over the last few years to extend the seasonal interest on display in the gardens. As part of this work, one focus has been to create meadow areas with a tapestry of flowering bulbs, providing early interest from January through until May. The meadow areas have been planted with bulbs for the past two autumns, and at the time of my visit, there were swathes of Narcissus ‘Actaea’ (image seen here), with white petals surrounding a small red cup, and Narcissus ‘Hawera’, with stems of nodding yellow flowers.

Interest created by flowering bulbs in the meadow areas has also been echoed in different sections across the Garden, with trees underplanted by Hakonechloa macra grasses and punctuated with the white of Narcissus ‘Thalia’, a particular favourite of mine with a gently nodding pure white flower. We are fortunate to have great numbers of Narcissus ‘Thalia’ here at the Museum and in the adjacent St Mary’s Gardens, which provided flashes of bright white in the gardens during the early part of spring. 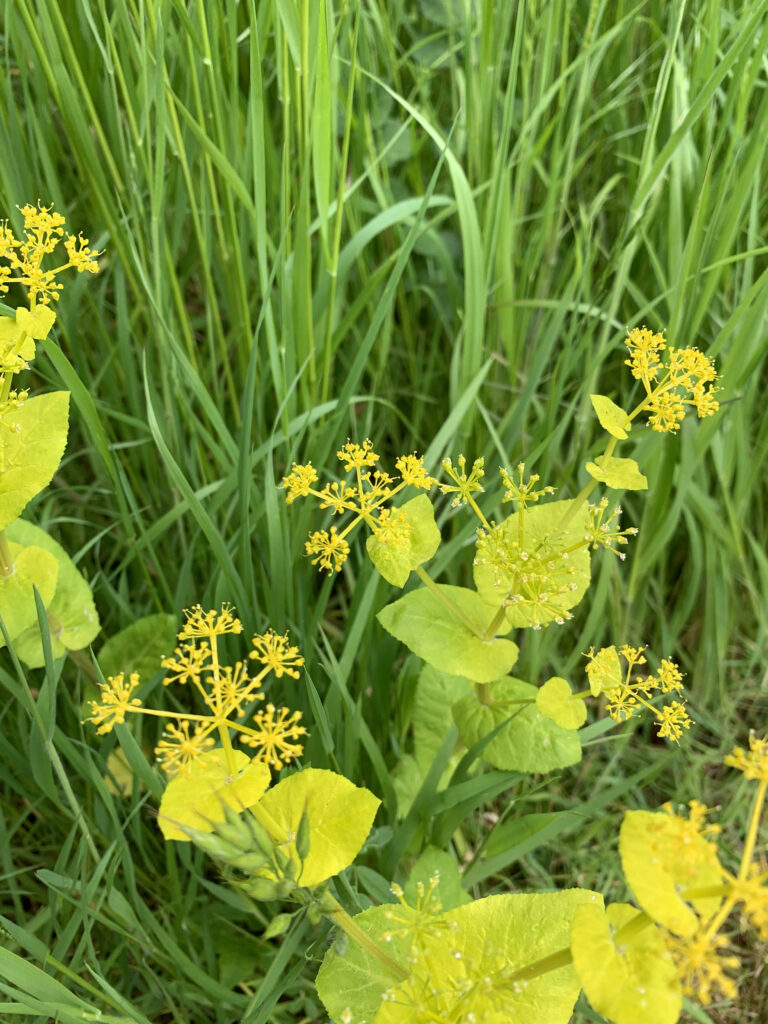 A sea of Smyrnium perfoliatum has also been added as underplanting to the London Plane Trees at the Inner Temple Garden, creating a wonderfully vibrant scene of electric yellow against the perfectly green grass. Just this week I was admiring Smyrnium at Benton End, seen above, where the Museum’s Head Gardener, Matt Collins, is tending to a treasure trove of a garden that was formerly home to artist-plantsman Sir Cedric Morris (1889-1982). Morris would have, I am sure, rather liked the colourful meadow displays of the Inner Temple Garden.

I would also be remiss if I did not mention the spectacular pot exhibitions across the Inner Temple grounds. Large collections of pots have been placed here and there to create colourful spring splashes, with Narcissus, Hyacinth and Tulip combinations. Tulipa ‘Apricot Pride’ and Tulipa ‘Exotic Emperor’ were just some of the varieties on display, seen here. During my visit we began dead heading some of the planters, in particular some Hyacinths whose show for the year was done. I sadly think that, at the time of writing, the tulips will also now have gone over. The team will, I am sure, have something special in store for the next display. 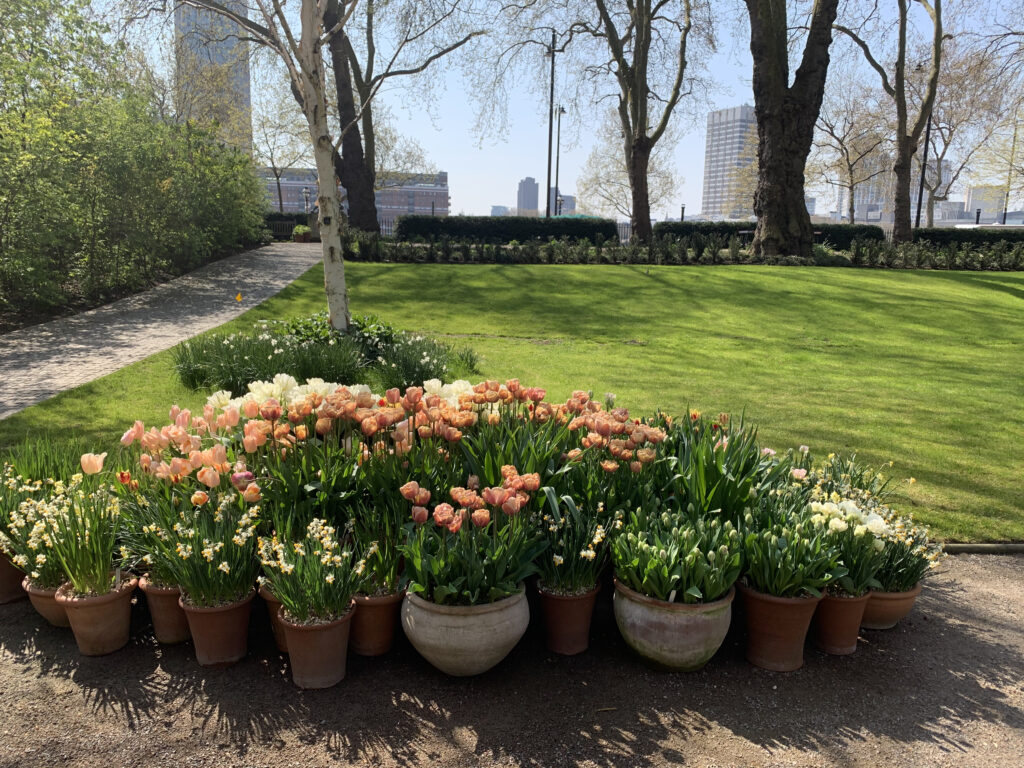 Much of my time was spent with the team maintaining the Garden, with some propagation work in the wonderfully organised glasshouse, seen here. One task included pricking out some young Sidalcea malviflora seedlings and potting on. Here’s hoping they are doing well!

Time was also spent creating structures to support plants in the borders. Weaving was done with coppiced hazel, which creates a natural looking plant support which is undoubtably more decorative when compared to bamboo canes. Deputy Head Gardener, Sophie Tatzkow, was very encouraging, although looking back at the photos I proudly took of my work, some were clearly better than others. Report would read: good effort, but still some way to go. One of my better creations seen below.

If you are able to visit, now would most certainly be a good time to go. The High Border is full of foxgloves, pale yet colourful spikes against the yellow back drop of Rosa banksiae ‘Lutea’, which has covered much of the old railings. A perfect spot for a lunchtime walk?