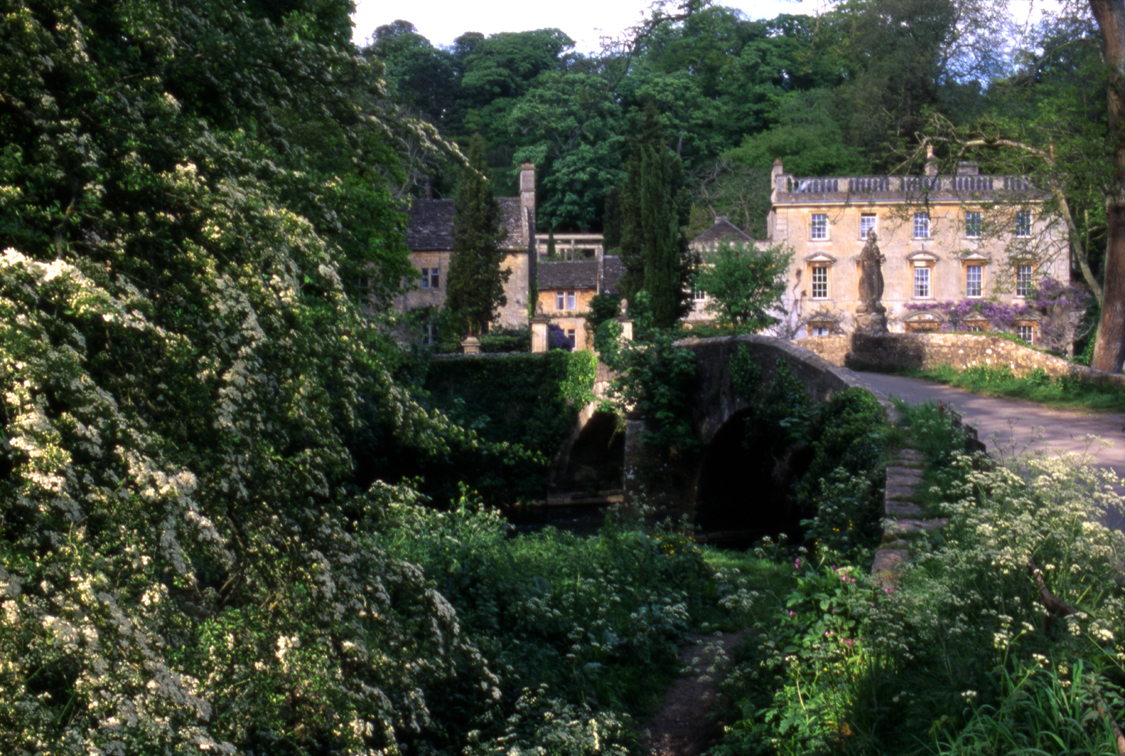 A visit to Iford Manor

As part of the Horticultural Traineeship at the Garden Museum, Thomas has the opportunity to work with experienced gardeners across the UK. This year-long traineeship has been generously funded by The National Gardens Scheme and the Museum’s Friends Group in Leicestershire and Rutland.

In December 2020, on the second stop of my gardening tour, I travelled westwards to Iford Manor, Wiltshire. Situated to the south of Bath, Iford occupies a unique spot, found at the bottom of a valley along a bend in the River Frome. Iford suddenly springs in to view, the honey-coloured limestone, that has long been associated with the area, emerging from the green.

On arrival, walking across the medieval bridge that traverses the fast-flowing river, you meet a statue of Britannia keeping guard. Britannia was placed here over a hundred years ago by Edwardian architect and garden designer Harold Peto, whose family acquired Iford in 1899. Although the history of Iford dates back much earlier than Peto, his garden-making here has certainly made this one of his best-known and most personal works. Iford was to be his focus and passion for over 30 years, until his death in 1933.

I arranged to meet Iford’s Head Gardener, Troy Scott-Smith, on the bridge on my first day. The grey weather and the low fog that clung to the river added to the drama of Iford. It is easy to understand why Peto would have been so enamoured with the location when he first stumbled across it, cycling these lanes in the 1890s.

Troy kindly provided a guided tour and talked me through the history of Iford, as well as the many exciting changes that are planned for the coming months and years ahead. Although there will be lots of gardening work for Troy and the team to be getting on with, Peto’s legacy, the dominance of stonework and his bounty of classical treasures will undoubtedly remain central.

Walking around the gardens, my first impressions of Iford – as a pleasant English scene, all green woods and rolling rivers – began to change. The Italian and Spanish styles, which Peto held in such high regard, are referenced throughout the gardens. Indeed, as an architect-turned-landscape architect, Peto had spent many years before the turn of the century working in Europe (and in particular along the Italian Riviera). By the time he was calling Iford his home, we can safely conclude that his love for all things classical and continental was deep-rooted.

One of the Iford’s foremost features is a grand – yet steep – flight of steps behind the main house, drawing you up into the unknown. It is softened with Erigeron karvinskianus, slinking into the nooks and crannies as it does, producing white and pink daisies even in the depths of winter. Off the main stairway, Italian-style terraces have been cut into the land, a trick necessitated by topography. These terraces allow the wanderer to wander, embarking on a separate route to the top. The private cloisters, just off the main stairway, are wonderful examples of Peto’s style. One intimate area, ornamented with classical reliefs and incorporating intricate metal work, is watched over by sculptures of a goose and an eagle. Peto had apparently been charmed by the gardens of the Alhambra, Spain, and there is, I think, a sense of the Iberian Peninsula here.

Time was spent in a neighbouring cloister, preparing two large pits, to be planted with topiary later this year. I worked alongside Iford’s Senior Gardener, Helen Braithwaite, and we removed many a barrowful of earth and stone. We then replaced this with a carefully considered concoction of soil, sand and grit, to give the topiary the best chance when it is planted. On frosty days, such as it was, I am always grateful for work that warms you up.

The gardening team have also been identifying areas that need replanting along some sections of the terraces and elsewhere in the gardens. I assisted with soil preparation and replanting along one such terrace. We forked over a large bed, previously planted with Buxus, removing chunky and tangled roots from the soil. After turning and preparing the soil, we replanted with Osmanthus, which will eventually interlock and form an evergreen hedge along this terrace in the years to come.

Continuing upwards, to the top of the grand stairway, you reach the Great Terrace, a levelled walkway with commanding views of the area. Tucked away in the far corner of the Great Terrace is Peto’s ‘Casita’ – his ‘Little House’ – with columns dating from 1200 that gleam in the sun. Historian and garden writer, Robin Lane Fox, describes Peto as an ‘artful magpie’, and having spent time at his Wiltshire nest, the comparison does seem suitable, with Greek and Roman antiquities aplenty.

Famously found along the Great Terrace is the bronze sculpture of Romulus and Remus being suckled by the she-wolf, cast for Peto from the original. He records in his The Boke of Iford, the ‘great difficulty’ he had in getting permission from the necessary authorities in Italy. I think Peto’s efforts in collecting and exhibiting ancient artefacts – be they large columns, old fragments of masonry or casts based on originals – tells us something about his approach to garden design. Peto wants to connect us with the past and the passage of time, but softened alongside structural planting, hedging, and trees. As he recorded in The Boke of Iford, it is the ‘combination of the two… which is most satisfying.’

On my final day, Troy and I carried out some Wisteria maintenance. On entering Iford, to the right there lies an arcade of hoops intertwined and entangled with a very old Wisteria sinensis. We managed to carefully hoist and lever some of the larger branches to a more preferable position, with minimal casualties save for a few smaller branches. I have only seen images of this Wisteria in May-time, but the promise of fragrance and colour from the blooms, contrasting with the honey-limestone backdrop, is more than enough to entice me back. I hope to return soon.

Whalley, ‘Harold Peto: Shadows from Pompeii and the Work of Sir Lawrence Alma-Tadema’ found in Garden History V.33, No.2 (Autumn, 2005)

Iford’s story continues, under the ownership of the Cartwright-Hignett family since 1965, with a visitor centre and restaurant due to open in April 2021.