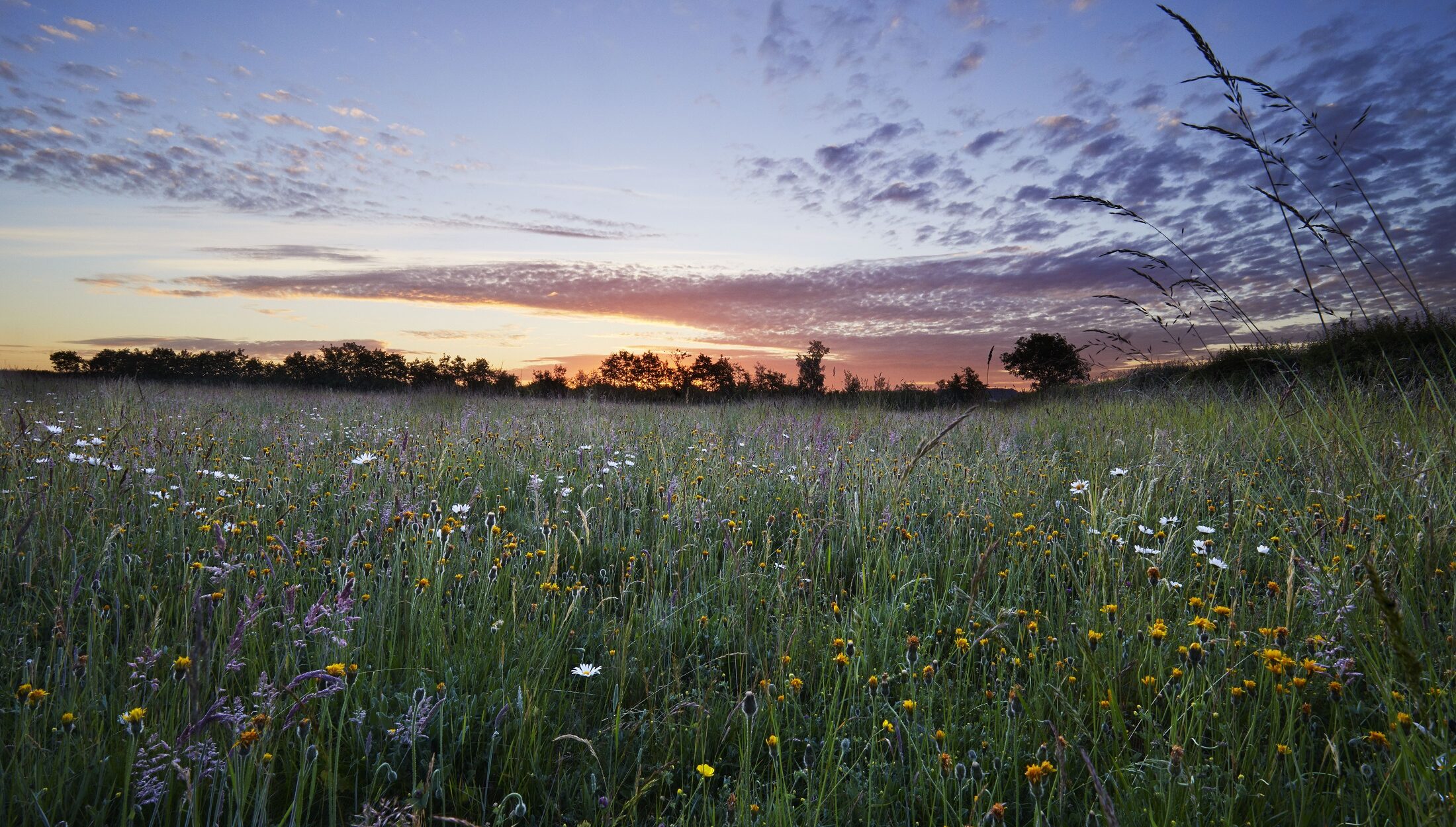 A Q&A with Hugo Rittson-Thomas

Wildflowers for the Queen, photographer Hugo Rittson-Thomas’ new exhibition at the Garden Museum, shines a light on the precious wildflower meadows of across the country, and celebrates the achievements of the Coronation Meadows established by HRH The Prince of Wales in 2013. Ahead of Hugo’s talk at the Museum on Thursday 16 September, we asked a few questions to find out more about his passion for wildflowers:

Where did the idea for ‘Wildflowers for the Queen’ come from?

I was first inspired at an event for conservation charity Plantlife at Chelsea Physic Garden and by the heartfelt message delivered by HRH Prince of Wales about Plantlife and its aims. In his foreword at the event, HRH Prince Charles called for the creation of new wildflower meadows in celebration of the 60th anniversary of the Coronation. The initiative was successful in creating 90 new wildflower meadows across the UK, but also highlighted the devastating loss of these landscapes.

A seed was sown in my imagination, which then blossomed into a plan of action to help support the ongoing work of the Coronation Meadows. If an image is worth a thousand words, then as a photographer that was my call to arms.

Where did your interest in nature originate?

As a child I nearly always spent outdoors running around with nature. Growing up in the Cotswolds in a remote place where you could see no other sign of humanity – no other buildings, no telegraph poles, no roads or cars so I developed a strong affinity and sense of place in nature. Our porch was a very lively place, always scattered with boots, coats and plenty of mud!

I have photographed other books on gardens and have always been very content amongst the elements and spending my working days outside. Transitioning from gardens to meadows was at once terrifying and glorious. My first shoot day at Park Gate Down in Kent was spent looking for a rare monkey orchid. I had the coordinates from a local wildflower spotter but couldn’t locate it, the sun was setting and it was getting increasingly cold. I thought to myself ‘What have I gotten myself in for?!!’ I’m happy to say I did finally locate it, and that was certainly the toughest flower to find.

You describe the meadows as “nature’s greatest celebrations”, and “as close to paradise on earth as you can get.” Which was your favourite meadow to visit over this year of photography?

Each meadow has its own unique personality and character due to different soil type and local climate, so they were all a great revelation. Certainly, Park Gate Down in Kent where I photographed the rare monkey orchid which had been believed to be extinct until 1952. So seeing that was one of many floral highlights.

Muker Meadow in North Yorkshire is truly like nowhere else in Britain, it’s like entering another world. It doesn’t boast the most striking or rare wildflowers, but what makes it so special is it’s simply bristling with all of our common and familiar meadow flowers like buttercups, thistles and red clovers. It’s the type of meadow that one wants to run through!

By contrast, Joan’s Hill Farm in Hereford is a meadow full of rare and delicate treasures and I had to be incredibly careful how I walked through it. Vast amounts of different species grow there and all in abundant quantity. I took a lot of photos that day, and found it the hardest to edit as I was spoilt for choice. This extract from the book, written by Dr Trevor Dines sums it up perfectly:

“The sheer quantity of common spotted orchids (Dactylorhiza fuchsii) in some places is breathtaking. Their lilac flowers are so thick on the ground that at times it’s impossible to put a foot down and you find your- self momentarily rooted to the spot. Common bird’s-foot trefoil (Lotus corniculatus), cat’s-ear (Hypochaeris radicata), tormentil (Potentilla erecta) and buttercups (Ranunculus sp.) provide a vibrant yellow counterpoint. Softened by clouds of oxeye daisies (Leucanthemum vulgare), the whole effect is mesmerising.”

Both meadows resonated with me as they date back to ancient times; ‘Muker’ means ‘new pasture’ in Norse – and the Vikings were in York in AD866! It’s incredible to think they have survived for so long; they’re historical relics and they belong to our national heritage as much as they belong to our environment.

How many meadows have we lost, and why is it important to save them?

We have lost a shocking 7.5 million acres of meadows since the 1930s, and today surviving fragments of flower-rich meadows and pastures only account for 1% of UK land. Most are too small to qualify for legal protection, meaning that ancient meadows that have existed for centuries can disappear in a morning under the plough.

Also, wildflower meadows are crucial due to the biodiversity benefits that they bring. They support a host of birds, mammals, invertebrates and insects – nearly 400 species of them, who alone are critical for the functioning of our planet – amongst 800 types of flowers and plants. They recycle nutrients and control pests that could otherwise decimate crops and serve as food for many species and are vital for pollination. Insects pollinate approximately 75% of the crops we grow.

How can people help and become involved with saving the meadows?

Like most things, small actions ultimately lead to significant change. I hope this project inspires and encourages people to discover meadows local to them; to visit and enjoy them, celebrate their beauty, recognise their importance and to get involved with their conservation. Photographing so many stunning meadows and flowers has left me a wildflower obsessive – an obsession I’m very happy to have – and I defy anyone who steps into a wildflower meadow at the height of its summer glory to not feel the same.

Hugo Rittson-Thomas: Wildflowers For The Queen is open until 17 October.

Hugo will be in conversation on Thursday 16 September: book tickets