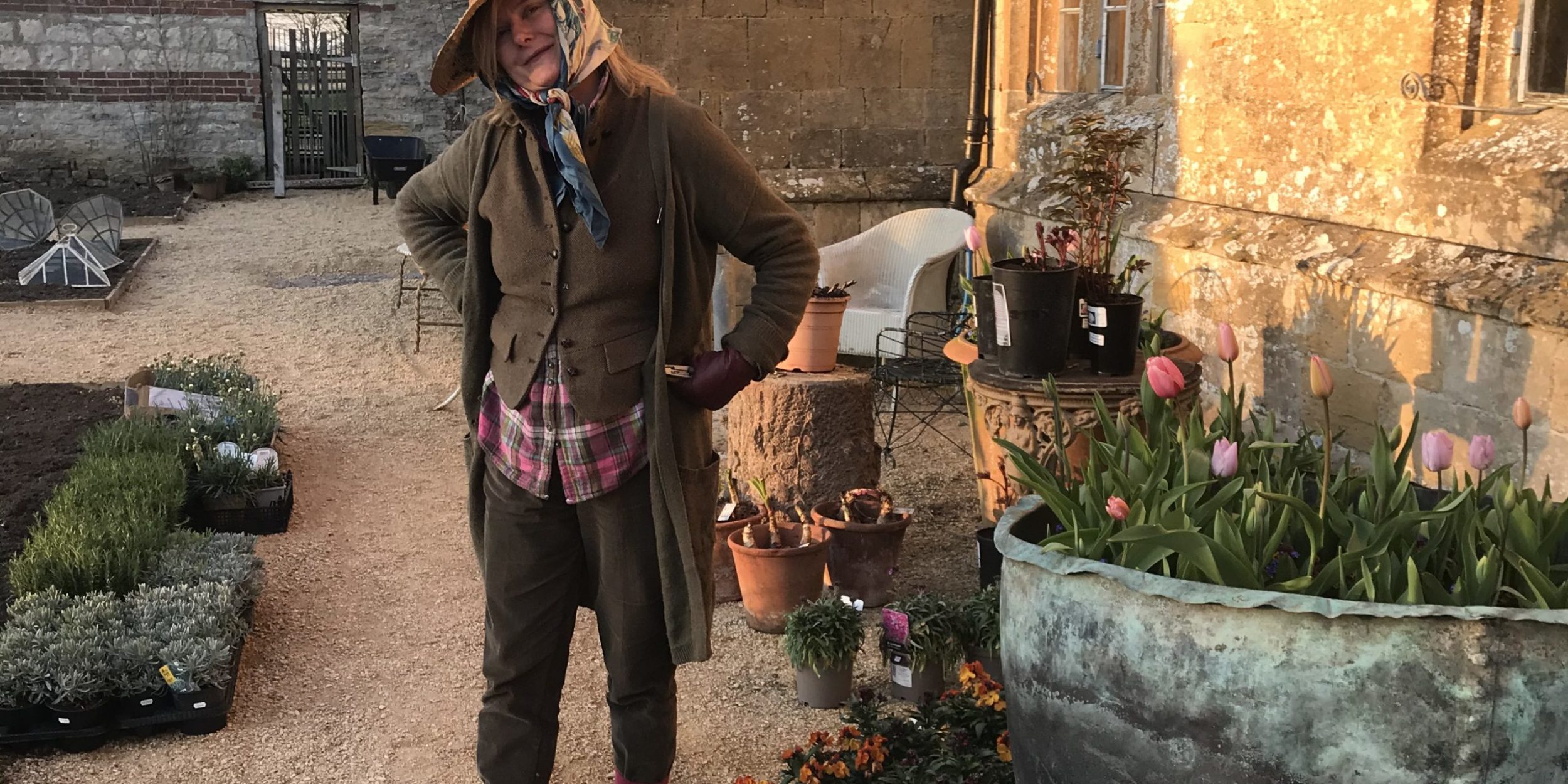 What do gardeners wear? – Isabel Bannerman

I don’t dress like this to garden, at least I don’t think that I do. But I do experiment all the time with what works best. Dressing up and dressing down. I was wearing these clothes and the head scarf when we added the hat as a joke, because I have bought, over the years, a number of hats which aspire to be like those worn by Nancy Lancaster and Rhoda Birley in those remarkable portraits by Valerie Finnis.

The elegiac Kodachrome images long haunted me, leaping singly from the pages of books and magazines, and it was thrilling when they were brought together by Ursula Buchan in ‘Garden People’ and the quiet brilliance of their maker was fully identified. But I have often wondered how those great dames, Gertrude Jekyll for instance in full fustian and polished boots, managed to do anything meaty in the garden when so attired. Margery Fish, gardening in the uniform worn by both my grandmothers, a tweed skirt and lisle stockings, confessed to sometimes clambering over her rockery in full evening dress and satin slippers.

Vita Sackville-West sensibly took to jodhpurs, following in the practical footsteps of those late 19th century women who refused to be lumbered with corset – Gabrielle Chanel, Colette, and Georges Sand. French women. Valerie Finnis herself, and all those women of Waterperry wore long socks (I am wedded to the alpaca ones) and a sort of gym slip crossed with a cow coat such as my father liked to garden in but which I find too much like wearing a dress.I realise from my endless experiments with what to wear to combat rain down the back of the neck and gravel in the boots – oh I hate those lace up boots – that all these dames had many a trick up their cashmere sleeve. Well, cashmere for one. I graze eBay for second-hand cashmere which I can wear into holes by machine washing. It is lighter and warmer than almost anything apart from mink and sable. Silk is the another one. I have a physical as well as ethical aversion to man-made fibres, and besides, they are never as warm as natural ones because they are sweaty. The idea of a pair of nylon tights breaks me out in a sweat. I almost always wear trousers. But jeans are cold. Corduroy and Moleskin is better.

My life changed though when I discovered the fine silk long-johns from Patra in north London to be worn under anything. They make me think of second world war airmen with their silk underclothes keeping them toasty at high altitude. When winter is coming it can all get a bit Game of Thrones. I like a sheepskin gilet – which is most efficacious, and those wrist warmers. Sometimes it is Kate Adie whom I emulate, a war-correspondent waistcoat with a ridiculous number of pockets can be useful. I have a pair of suede chaps to keep thighs and knees warm and dry – no protection however for the poor old bum. Muddy chaps can be removed easily when you come into the house for tea, a bonus even in our lax household. I bought them in one of the horsey emporia which smell so deliciously of sawdust, animal feed and rubber. Good places for finding waterproofs and boots, which must be lightweight, not too much indented on the sole (so as not to pick up clods ) and ideally go in the washing machine. Everything goes in the washing machine. Everything gets covered with soil and grit and mud. It must be something about the way Julian and I garden, on our bums, knees, bellies. I lie down more and more, finding it harder and harder to get up.

When I wrote in ‘Scent Magic’ that Julian and I would divide snowdrops in the steep sided coombe at Hanham ‘lying on our bellies like seals’ my editor put a line through it and when I asked her ‘why?’ she said ‘but you don’t really lie down in January do you?’ Yes, we do. We sort of wallow and crawl and dig from the waste while kneeling or lying like soldiers making foxholes. As Ian Hamilton Finlay said ‘Gardening is not a retreat. It is an attack.’

Each day before dressing I have to decide “Who am I? Peasant labourer or Office Barbie?” The latter is a marginally less disheveled version of the former.  Much of the time I have to be both, but if we come back from a meeting in time to do something in the garden I will always have to change entirely, while Julian heads on out regardless. He is lucky. I have always felt the cold. I am a serious wimp, shrinking from the mere thought of getting cold and wet. This means I cannot go out unless I have the bases covered – dry feet, silk long johns, vest, gloves and, most importantly, ears protected.

I like any hat with ear flaps which wave in the wind like Mighty Mouse until tied down under the chin before the aching in my ears has reduce me to tears. In summer, a wide brimmed hat gets in the way, but if tied down with a scarf, well then it stays on and one has invented the bonnet. Something round the neck is now essential. My youth was spent hanging out of windows and draped over hot lead roofs lathered in Piz Buin, Bergamot and Ambre Solaire trying to fry myself to a crisp. My mother always said it was foolish in the extreme. She wore those silk scarves worn a la Brenda and her sister Margaret; triangles tied under the chin with sunglasses always. I have now discovered –  much droll commentary from the sons – that this is a remarkably comfortable and versatile garment, keeping the ears cosy or the neck, gathering up the sweat like a wick, and keeping the straw hat from pricking and the hair from annoyingly coming loose and tickling.

Gloves are my big foible. I collect ‘old lady’ leather gloves from charity shops. The thinner and finer the better. Most ‘gardening’ gloves are either too bulky or too synthetic. Leather is a second skin, but it wears through so quickly that one wonders at how resilient and remarkable an organ is skin. Without gloves I am less than half as effective. Its not that I mind dirt, it’s the cold and the wet cold numbness, and the prickles, that you have to worry about. Gardening for me is hot, cold, dirty sweaty, cursing work – not always but often.

The other day I was wondering why anyone invented the back-breaking thing called a hoe. I suppose that not to have a washing machine would make you much more careful. When you had barely two sets of clothes, one of which was for Sunday, it was important to have tools that kept you out of the mud: hoes, rakes, pattens for your shoes. There is an excellent sign on the church at Trent near here – ‘Please remove Pattens before entering’ – maybe I should try pattens next.

Our guest contributor next week will be floral designer Shane Connolly.

Scent Magic by Isabel Bannerman is out now