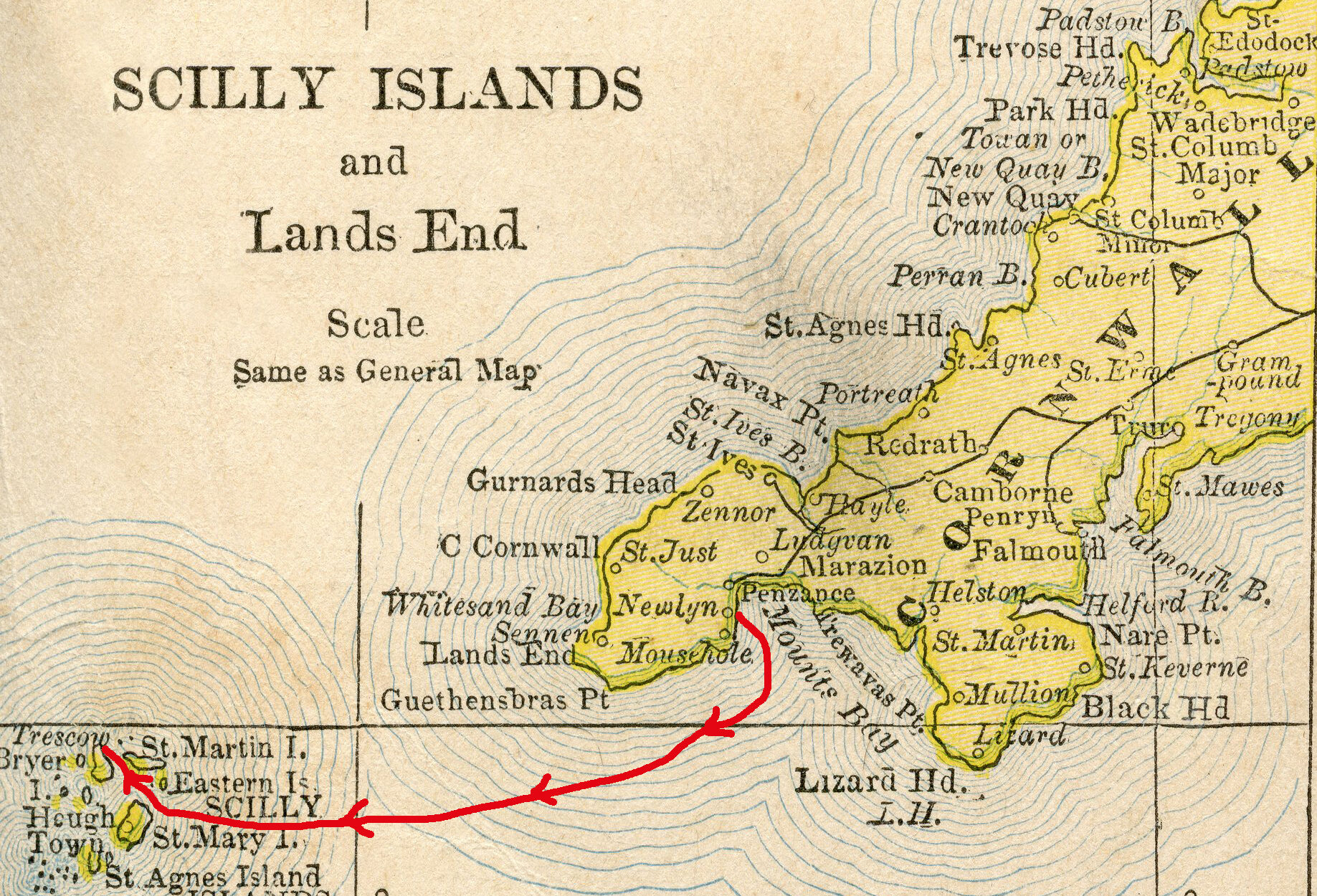 Sponsored Swim: An Update for Sponsors 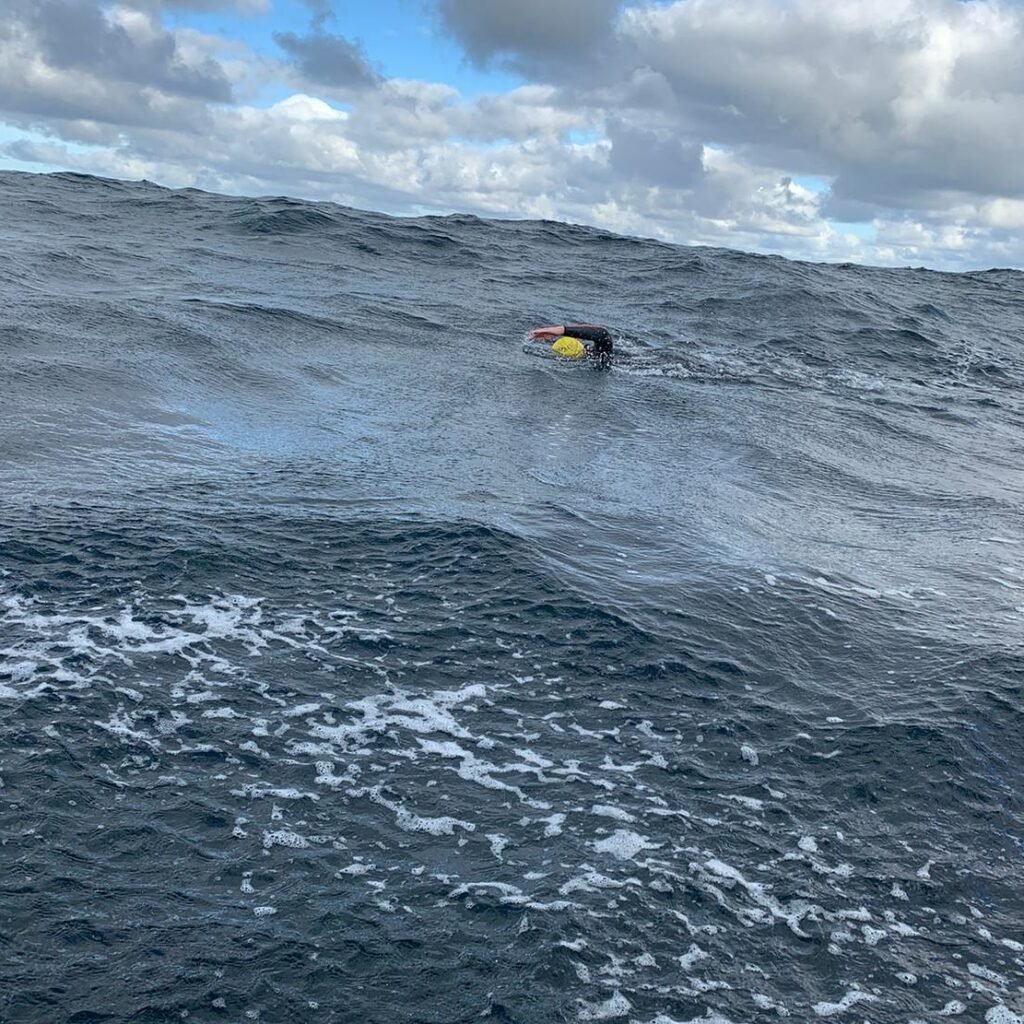 I began the Sponsored Swim from Newlyn to Tresco on Saturday 10th October, and we had two good, hard days of swimming. However, by Sunday afternoon the sea was just too rough: as the wind moved between Forces 4 and 5 on the Beaufort Scale, the waves were sufficiently high that on their crests I found myself looking down in to the escort boat.

I am back in London waiting for the next favourable tides: on 2nd to 4th November and, then, on 15th to 18th November.

These are the ‘spring tides’, the surges of water which, we plan, will sweep us towards the Isles of Scilly. If these days coincide with light winds, I’ll make it to Tresco. Just very cold. When I read about Cedric Morris sailing to Tresco in December 1950 I never imagined that I’d be making then journey in winter.

But the drop in temperature is more than offset by the continued donations and pledges, which have passed £300,000. More than 900 people have made a gift or a pledge, and matching funding is currently in place from an anonymous Foundation. It shows how much people care about the Garden Museum. And, added together with the good news of an award from Arts Council England’s Culture Recovery Fund, the Museum will have survived the pandemic.

A short account (some of which may only be of interest to swimmers).

Writing about swimming is difficult: all that you do is repeat one motion several thousands times. Swimming crawl, you look down in to an opaque grey. Once you have left the shore, you stare at black water, glancing up to measure the next wave. Here’s a try.

The swim was scheduled to begin on Thursday 8th October but the previous weekend Storm Alex blew up off Cornwall. On Monday John Coningham-Rolls – with Alice Todd, his co-founder of Swimquest, one of my two guides – called to say that the weather was so bad that the captain of our escort boat was unable to get out of the harbor on Tresco. The plan had been for him to meet us in Newlyn, where Cedric, his partner Lett and his sister Nancy lived in the artist’s colony. 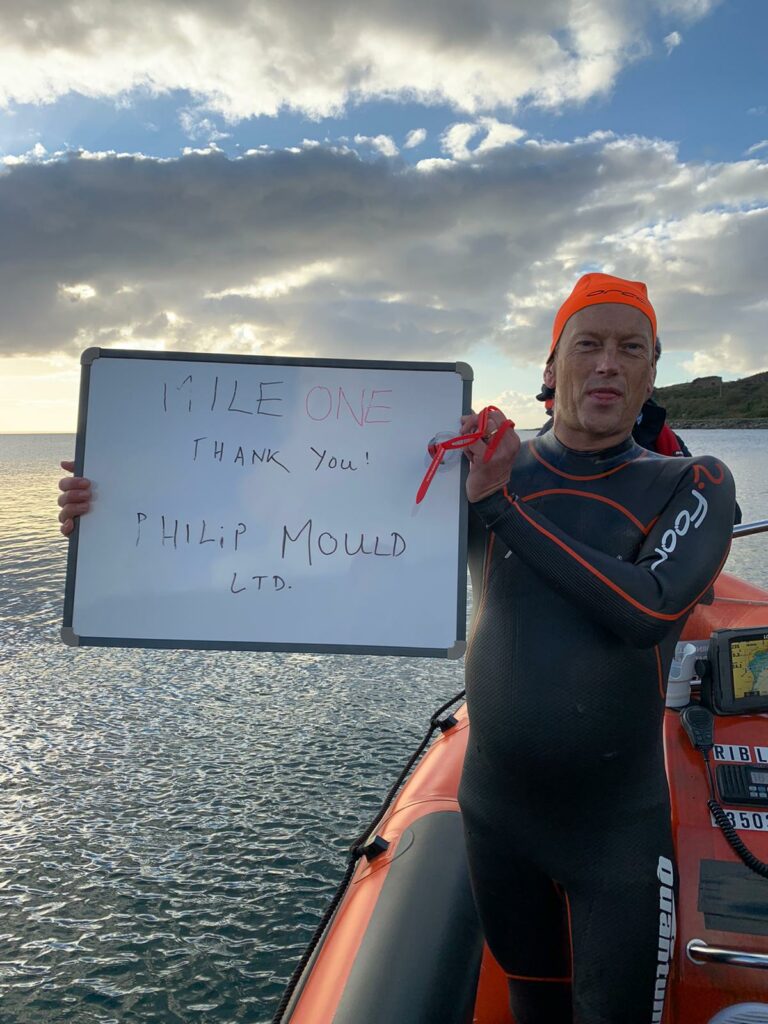 By this point in training you are spinning with strength, nerves, and expectations. We decided to set off nevertheless, even if it were to swim ten strokes: after all, Alun Jones (with his wife Biba the architects of the Museum) had gone down to open up the house they have built in the port. And I’d already bought my son’s train ticket. And when we were on the train Alun sent a video of a suddenly calm seashore.

Meanwhile, John and Alice had found a boat in Penzance, contiguous to Newlyn in the long bay which has St Michael’s Mount as its focal point. Charles Hood has a RIB (a Rigid Inflatable Boat) which takes shark tours off the coast, and is expert at navigating the currents off Land’s End.

And we were off at sunrise. I’d imagined swimming out of Newlyn Harbour, not realizing it is the second busiest fishing port in Britain. So, I stepped in from a small beach beside the ruins of a 16th-century harbor.

The big question was: how cold would it be? 14 degrees. That is cold. But it is bearable in a good wetsuit, and if you keep up a fast stroke rate (52 per minute). We flew through shallow clear water past Mousehole, the next inlet, and reached Lamorna Cove for lunch. The swimmer is stripped naked, dried, wrapped up in an absurd number of layers, and filled with tomato soup. Just when you are feeling warm and, glancing up at the sparkle of granite in Pictueresque bay with children skipping stones in to silvery clear water, and beginning to imagine you are on holiday, it is time to get back in. We had decided to leave the coast, and strike out to sea.

The sea changed. The next two hours were the hardest swimming of my life, except for the sprint of two hours to complete the Strait of Gibraltar for an earlier Sponsored Swim in 2011. You have to punch a hole in each wave. Then the waves began to come from all directions, so you are, in effect, swimming in a giant washing machine. And, for the first time, I got sea sick when in the water.

My mascot on the day was my son Luca, just turned 17; here he is, looking after his exhausted dad at the end of the day. 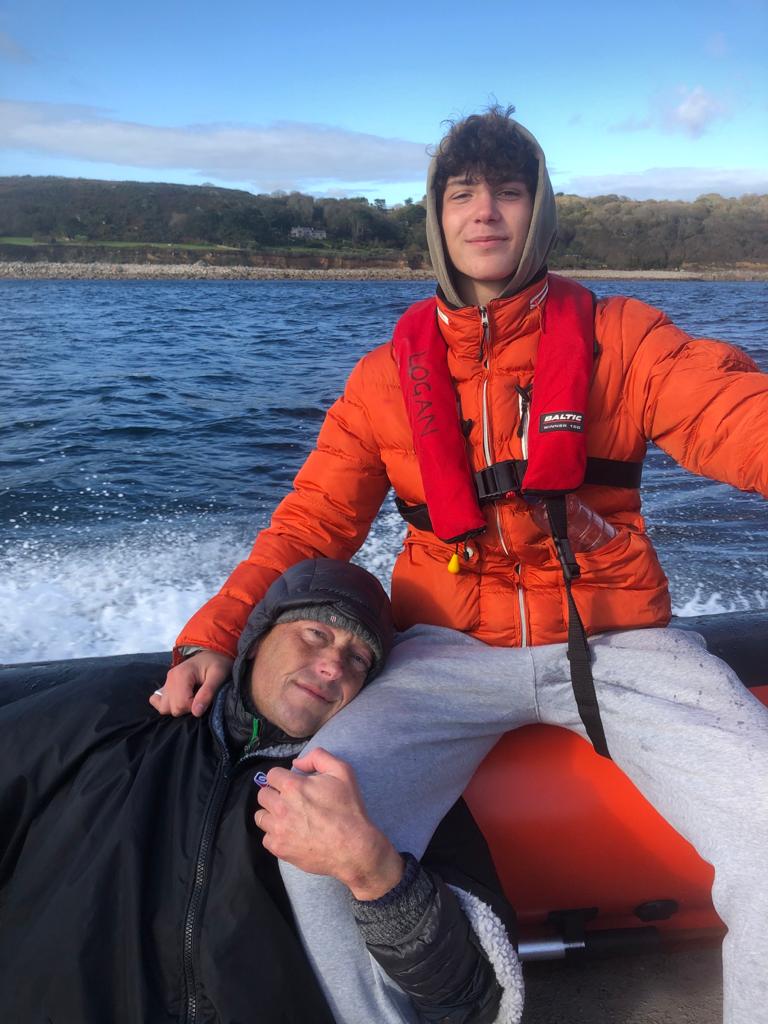 Up early in the belvedere created by Dow Jones Architects with its views over the rooftops to St Michael’s Mount. Getting in to the RIB, a swan pecked our hands as we were distracted by its silhouette. 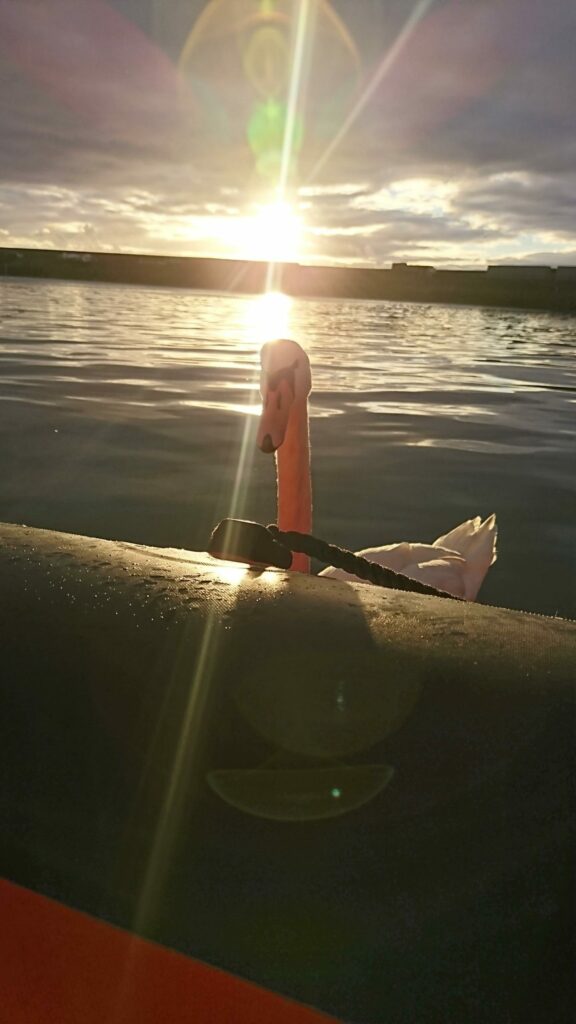 Charles revved back to where we had stopped. Then, over the side in to the deep Atlantic. Our first landmark was the Runnelstone, the buoy marking the edge of British waters – and a notorious reef. Alice described an eerie whistle from the buoy; luckily, I couldn’t hear, through two hats and ear plugs. There was just one fishing boat out, pitching in and out of sight.

The waves were much higher, but the swim was easier as it was a regular swell, and you can read each wave, and bend your stroke to its rhythm. It was only when I stopped for a feed that I yelped: I had not realised just how high the swell was. ‘We’ve never had a swimmer in such high waves’ smiled Alice. ‘But you’re fine. You’re handling it’. In general, you do not want to swim above Force 3; we were somewhere between Force 4 and 5.

The morning was strangely exhilarating. What begins to tire, however, is that stroke rate required to keep your temperature up, and the absence of any object ahead: the horizon becomes just yet another wave crest, stinging your cheeks. After two and a half hours, the wind continued to pick up, and the guides whistled me in.

Once inside the boat I could see, 4.5 miles away, the pencil upright of Wolf’s Rock Lighthouse. It took 8 years to build in the 1870s, as the sea was just too rough. That’s our next target!

Charles came up with a new plan. We’d imagined swimming for seven hours a day on the slack tides, with two breaks. But it’s impossible in such exposed conditions. So we will wait for the spring tides, and swim fast for three hours, our speed doubled by their force. The bad news? The next is on 2nd November.

But we can’t wait to get back in to the sea. 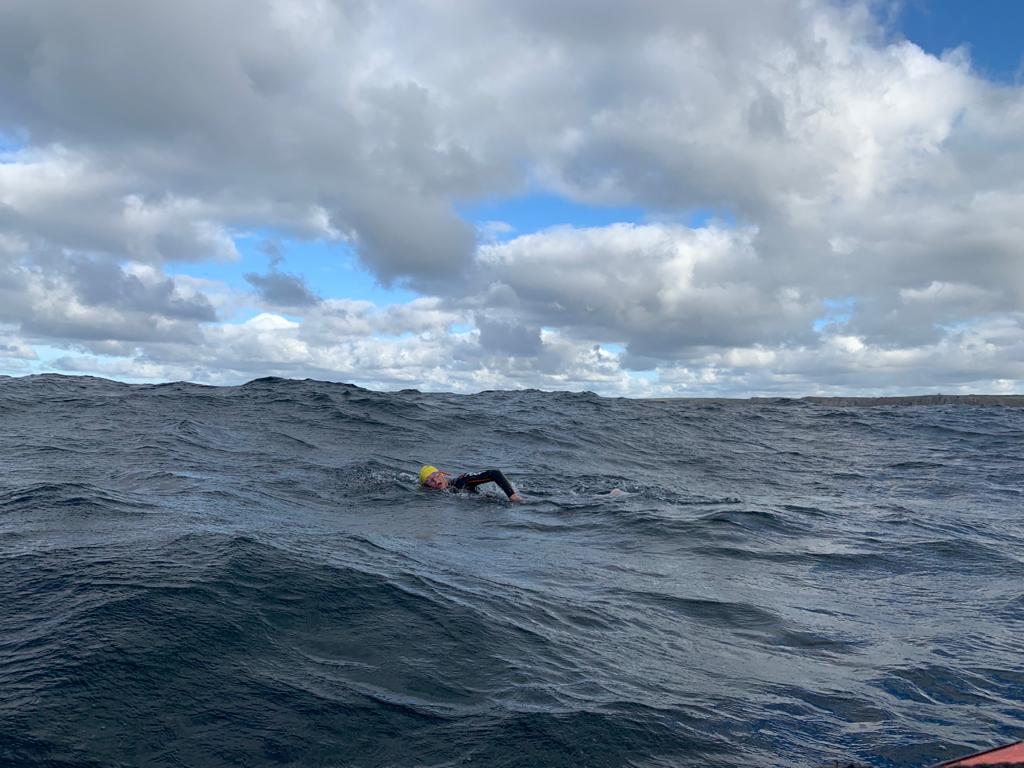 I came late to swimming, and every time a teenage champ dolphins past me in Charlton Lido I am reminded that I will never be as agile as that. (‘A bit demoralising’ I say to the Lifeguard ‘to be overtaken by a 14-year old’. ‘Oh, but they’re in their prime’ he replies. Great). But today I was proud as Alice said: ‘We’ve never had a swimmer handle such big waves’.

How is this safe (because it is), and do-able, some people have asked?

Three things. First, physical strength. Particularly at a time of C-19 uncertainty it’s a lovely feeling for matters to be determined by your shoulders and glutes, not a muttering graph or a politician. Secondly, and critically, the expertise of your guides and pilot. You are safe by proximity to the boat: as soon as it dips out of sight behind a wave, the worst fantasies – of submarines or orcas – grip your stomach. And you have to have 200% trust in their judgement: if you were ever to think that energy was wasted, your rhythm unravels.

Thirdly, a state of mind. This is, in part, the sense of being part of something bigger: you are held in a net, as it were, of support, and purpose. I have never seen the point of racing another person, or of swimming the Channel to prove that I can. This swim has a value beyond the self, and a path marked out by a modest exemplar, Cedric Morris.

It also requires a sense of illusion to be cheerful and concentrated in such a context. I was happy to say to myself – under the rubber hats – ‘turn right at the second star’, for swimming the high sea is like the Darling children flying the night sky. In my emergency pack beside bananas and spare goggles is always a copy of Robert Louis Stevenson’s “Treasure Island”. Not to read – I know what happens – but as a talisman.

Too much knowledge, and you slow. That’s why the guides take away your watch (the first thing they did when I swam The Thames from Oxford to London in 2014, 8 ½ days to raise funds for our showcases in Tradescant’s Ark was say: ‘Give us your watch and don’t look at the map’).

‘That’s John le Carré’s house’ remarked a local, pointing to the cliffs. I remember at, perhaps, fourteen reading my father’s Smiley novels. I was so repelled by the mustiness of adult behavior that I’ve never tried those books again. Re-reading Humphrey Carpenter’s ‘Secret Gardens’ (1985) in preparation for our exhibition we hope to do next summer, I underline his opening statement:

‘All children’s books are about ideals. Adult fiction sets out to portray the world as it really is; books for children present it as it should be’.

Our next landmark is the Wolf Rock Lighthouse. That is both something very adult: a structure built by expertise and patience of engineering in the 1870s, after 200 years in which beacons were swept away by storms. But a lighthouse is also childishly romantic. I’ll need both adult wisdom and childish lightness to swim there.

I returned to London to the exceptionally good news that through the government’s astonishingly generous Culture Recovery Scheme we have been awarded a grant by the Arts Council to address a winter in which income from venue hire, events, and café continue to dip.

My first meeting was a conference call chaired by the Inspector appointed by the Planning Inspectorate to decide the future of the Fire Brigade’s derelict 1930s workshop behind The Albert Embankment, now that the government has taken the decision of out of Lambeth Council’s hands. We discovered that we, amateurs and volunteers, will be up against a top planning QC funded by none other than Lambeth Council. Why is the Council’s planning team spending £150,000 of public funds on a scheme which will take over 40% of the daylight from the residents of social housing, and destroy a campus of Fire Brigade buildings described by SAVE Britain’s Heritage as ‘the finest assembly of Fire Brigade buildings in the country’.

We spend a day unpeeling more sleights of hand from the thousands of laminated pages produced by a £500 million development. We were told that the Towers would not be visible from Museum. But they would be. We were told that the light on the Sacker Garden would not be affected. It will be. We were told by developer U+I that ‘the residents are happy with the proposal’. But 5,000 people have signed a petition against the proposal. And so on; I could give a dozen more examples, each as banal.

After two days re-immersed in this great grubbiness of greed, cynicism and concealment (dressed in expensively cheap suits) I’d rather be back in water thousands of metres deep. The Atlantic is, at least, honest.

Oh, and if any Friend or supporter does have a very big white boat to follow Charles’s RIB, that would be nice. 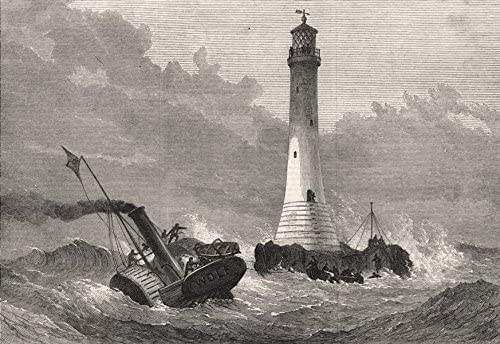 Support Christopher’s Sponsored Swim to Save the Garden Museum here.