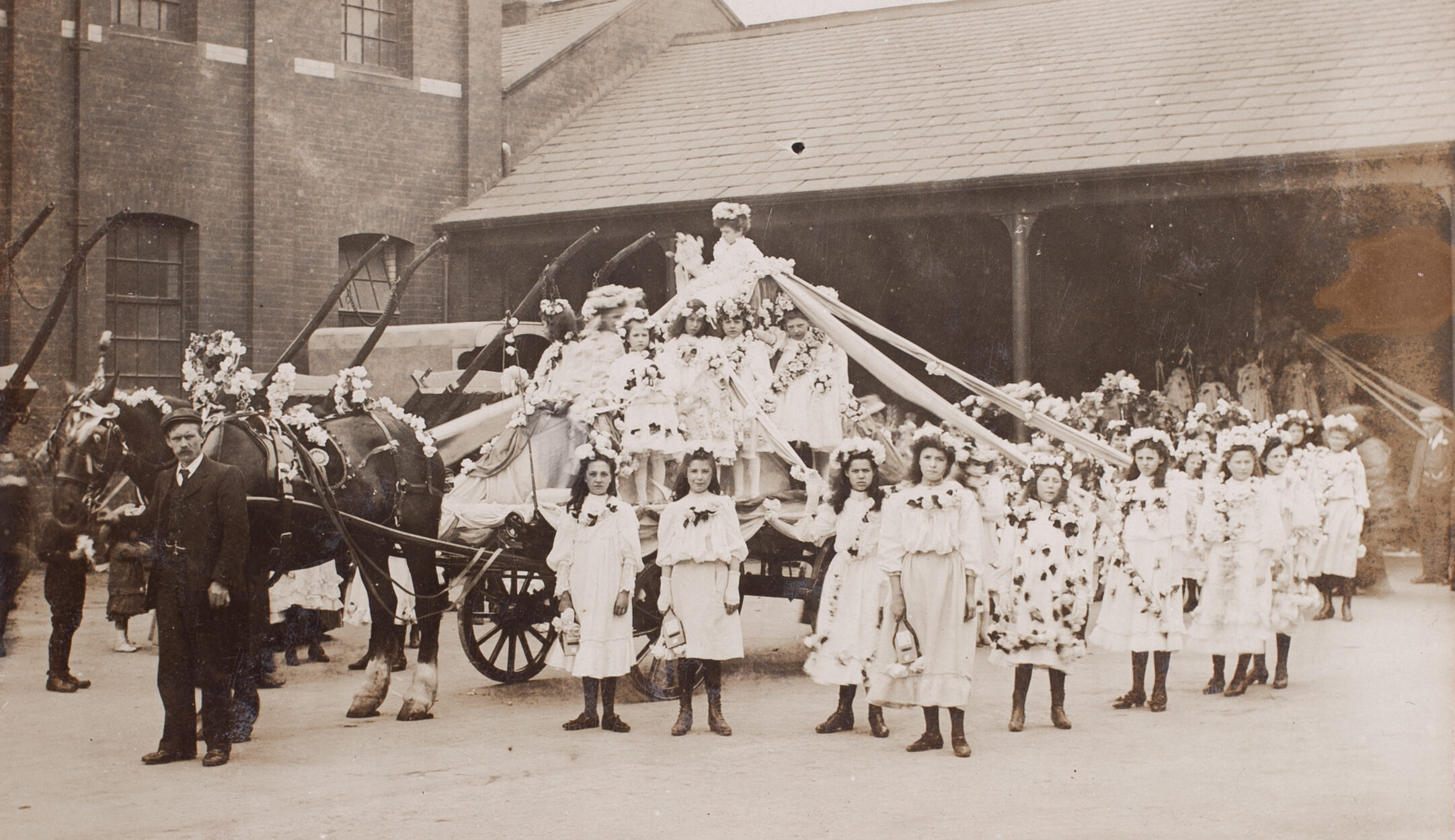 The culture and flowering of roses has been celebrated since at least Ancient Roman times, when the lavish Rosalia (also known as rosatio, meaning rose adornment) carnival was staged. And, rose growing nations have held various themed events ever since. From the 1880s, the rose queen festival, mostly held in June, became a major annual event in towns and villages across the UK, especially in Lancashire - known as the red rose county, following the Wars of the Roses (1455-87).

Rose queen festivals share similarities with May Day, which originally marked the dawning of the Celtic summer and fertility rites, but – like many British ‘traditions’ – was re-presented by the Victorians. Like the May queen, her rosy highness was chosen for her scholarly and/or religious diligence, popularity and/or beauty. Along with her attendant maidens, and occasionally partnered with a king, she was conveyed ceremoniously by rose decorated horse or pony drawn cart or lurry, on a street parade that culminated at a local green site.

At larger festivals, to which many thousands of visitors flocked by train, locals paraded in costumes variously inspired by flowers – including red rose, white rose, ‘queen of the rosebuds’, pansies and daisies – mythological figures, famous people, characters from nursery rhymes, literature, local tradespeople etc. In 1891, organisers of the Chorley rose festival, reported that 7,900 people, 600 in costume, were counted into the cricket ground. But, as the press regularly reported, it was the rose queen who commanded, ‘the cynosure of all eyes.’

The rose queen, like the May queen, customarily wore a white or ivory coloured dress with a coloured sash, but whereas the May queen exulted in the profusion of Spring flowers, our queen glorified just the one.

Her crown was based upon the Imperial State Crown (interestingly, the sum of a flower’s petals is called the corolla, a diminutive from the Latin corona, meaning ‘little crown’.) Originally designed for King Charles II, it has an openwork gold frame with jewel decorated crosses and fleur de Lys, and a fitted purple silk velvet cap with an ermine band. Ermine is a regal fur. Named after the white weasel Mustela ermine, which has a black-tipped tail, it is characterised by a white ground embellished with the short, black tails of small animals. The rose queen’s trained robe was trimmed with, or an emulation of, ermine.

The crowning ceremony was conducted by a local male dignitary, whose declaration followed similar lines to those of the mayor of Southport in 1888:

“We bend, fair sovereign, ‘neath your gracious sway.
And hail you queen! On this our festive day.
Upon your head this bounteous crown we place.
Deck’s with the flower most dear to England’s race.”

To which the rose queen responded,