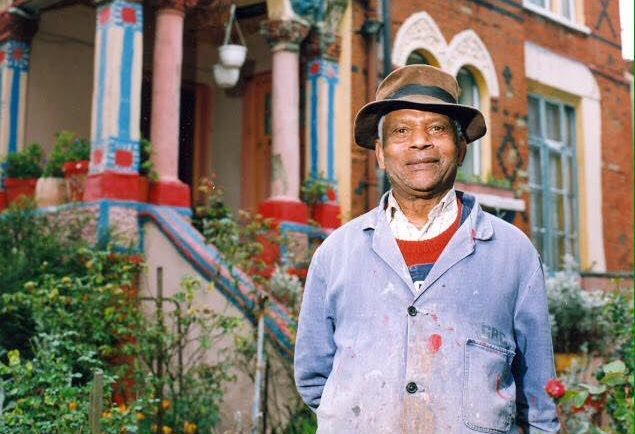 In Lewisham, where I live, the sound of strimmers is rare. But one lockdown night I heard that strimmer’s roar from behind the wall where, since 1967, Mr Brenton Pink made a garden in memory of Jamaica. I wish I had stopped, but the house is on a steep descent, and I was, as ever, late. When I returned the next morning Mr Pink’s roses were stumps. I knocked on the door and the young woman who answered nodded: ‘Someone made a mistake’.

This week is British Flowers Week, and if we were open, the Museum would be an artful burst of thousands of flowers in our annual exhibition of contemporary floristry. That’s postponed until next year (Thursday 10th until Tuesday 15th June 2021). So our horticultural hero for this highpoint of summer is Mr Brenton Pink, born in Jamaica in 1925.

I was told about Mr Pink by Janine Nelson, our Head of Learning, when, two years ago, we began work on a project to record the Caribbean horticultural heritage of south London. This January the National Lottery Heritage Fund – without whom there would be no Garden Museum as you know it – awarded a grant so that ten members of the Windrush generation can record their gardening stories. Each will be interviewed and filmed by a Sixth Form student, and also donate to our archive and collection artefacts which tell the story of their gardening life, thus inter-weaving their journey into British garden history. (This project is also postponed by the lockdown: the participants are over seventy years old).

Sadly, we will never meet Mr Pink, who died in 2017. But, luckily for posterity, Helena Appio, a neighbour and film director, one day decided to knock on the door of the curious pink house on Loampit Hill. The film she made his  life, inside and outside, and we are grateful that we can share this with you in this week’s Museum newsletter.

A musician in Jamaicia, Brenton came to Britain in 1957, and got a job as a street cleaner for Lewisham Council. In 1967 he bought a derelict Victorian mansion, glowering with the respectability of another age, and began to re-sculpt its ornamental figures, paint it pink, and plant a garden. As he puts it in Appio’s film, ‘When I just bought it, well, it was not beautiful. But since I take it over and added myself towards it, I developed it to have a lightness. My additions make a difference, brighten it up. I’ve created a part of Jamaica here. Some like this house and some may not like it, I don’t know. But I know a lot of people like it and I like it myself’.

Don’t care too much what others think about your art was one lesson Appio learned from Mr Pink. And, she adds, ‘The second was that although he lived a very simple life on, I imagine a fairly small salary and had suffered racism, he still felt that looking back he had had ,”A majestic life, I praise it”.

Peek over the gate and you’ll see a face with seaweed-green tresses. A Victorian ornament which he thought ugly was re-chiselled, gently, to be prettier. ‘It looks like Jesus,” he says. And there is real pain in the film, too: Brenton talks of his bemusement and shame on being detained at Heathrow on his return from holiday in Jamaica.

This is a week in which British-grown Flowers meet Black Lives, and we’ve begun to reflect on what we, as a Museum of garden history, should be doing. To an extent, an understanding of diversity comes naturally to gardening: every serious gardener knows that the British garden is the consequence of plants collected from habitats across the world making new connections in a temperate climate. (And, as Noel Kingsbury summed up to me, ‘Britain has the poorest native flora in western Europe. Except, maybe, Ireland’).

But plants contain pain, too. Take Captain Bligh (buried in our garden):  the voyage of The Bounty was to collect breadfruit for the slaves on Caribbean plantations, thousands of whom had died of starvation when the American War of Independence had disrupted the shipping of other foods. And when Bligh sailed in to Kingston, Jamaica, after his second, un-mutinied expedition in The Providence the thousand seedlings of breadfruit trees on the ship’s deck transformed the subsistence of the islands for ever.

A breadfruit is a lumpy, simple, nutritious thing. But it has disputed meanings. To some, it was ‘food for free’ after slavery was abolished in the British Empire in the 1830s; to others, Bligh’s journey cannot be separated from the part it played in the perpetuation of an infrastructure of exploitation. The breadfruit’s place in history is the subject of one event in a programme this autumn in which we’ll reflect on what Black Lives Matter has to teach us about garden history. (This particular event will be chaired by broadcaster and historian Wesley Kerr, who curated last year’s exhibition on Rudi Pattison, the Jamaican-born actor and painter, whose ‘Arcadia’ hangs in our Finnis Scott Gallery; watch this space for details).

In the meantime Mr Pink’s Jesus is crumbling, and I wonder at the condition of the plasterwork interior he created. There is no house like this in London, and our immediate resolution is to apply to Historic England to have it listed. The roses have been left as stumps. Someone made a mistake, said the woman who answered the door. They’ll grow back, I said.