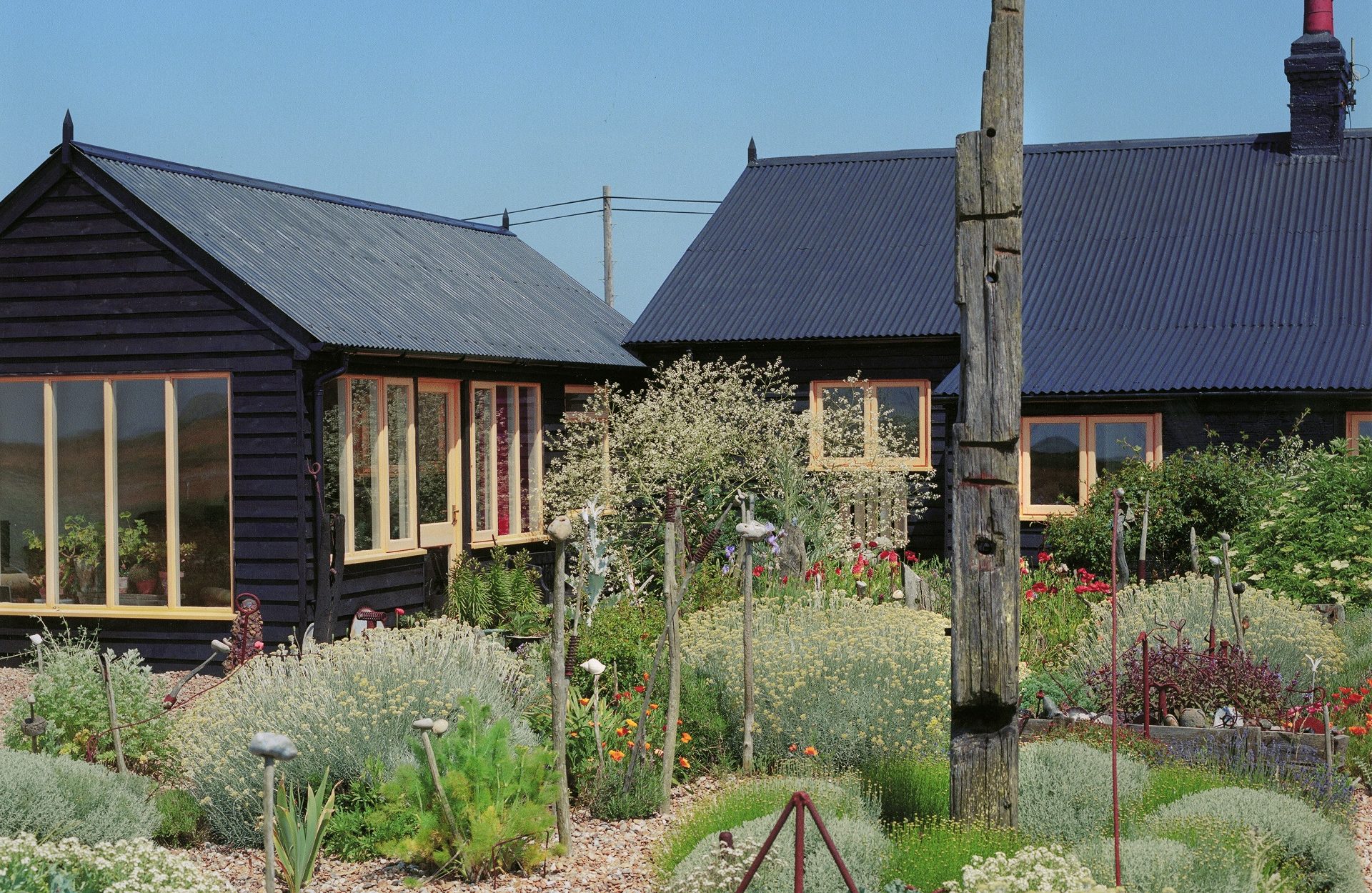 For gardeners, the great ‘hurrah!’ of lockdown was the news that Derek Jarman’s Cottage on Dungeness had been rescued for the nation in a £3.5 million fund-raising campaign led by Art Fund. The Cottage and art collection will be preserved intact; here, ‘intact’ means inseparable, for when you step inside every square metre of the bare wooden bones of the fisherman’s cottage are barnacled with works of art and memories. And just a pane of glass separates you from the garden, beach, and sea. Add to that its inspiration to photography, writing and film and it is perhaps the most powerful work of British art of recent decades.

We are celebrating Prospect Cottage in our next exhibition, which will be ready to open on 4th July, if the government’s steps continue to allow museums to open on that date. Right now, the ‘set’ is being hammered into place. It is being designed by Jeremy Herbert, a designer of opera and theatre including at the ENO. We have never worked with a stage designer before but the first garden Jarman designed – as a gregarious firework fizzing out of the Slade School of Art – was a garden for the production of Don Giovanni in 1968 with which the ENO inaugurated their arrival at the Coliseum Theatre. And what we are trying to do is share that three-dimensional and sensory experience of being inside Prospect Cottage.

We are very lucky in being able to borrow artefacts from within The Cottage itself, from Jarman’s beloved gardening tools and watering can to a painting by film director Gus van Sant, which depicts the Cottage being whirled up into the sky. For one inspiration was Dorothy’s house in The Wizard of Oz, which Jarman saw as a child in post-war Rome and which would always be a movie at the well-spring of his heart. (Watch the opening scene, and look at a picture of Prospect Cottage, in particular before Jarman built a sitting room as an extension).

Jarman’s archive will go to Tate and here, on site, are several of his photographic albums and Journals. We’ve been flicking through to pick images for the catalogue. The Journals would be re-published in ‘Modern Nature’, which entranced when read by Rupert Everett on Radio 4 last year. The Journals are pungent with plants, and plant lore, and on the shelves of Prospect Cottage is everything from David Austin on roses, and Roy Genders on cottage gardens, to Culpeper and Richard Mabey’s Flora Britannica. This is the bookshelf of a life-long gardener-poet.

When I first met Beth Chatto she told me a story of she and Christopher Lloyd went to picnic on the beach at Dungeness in the summer of 1990, three years after Jarmn had bought the shack on bare pebbles. Brilliant flower colour caught their eye: Prospect Cottage. Derek Jarman stepped out, recognising two of his horticultural heroes. And, Beth remembered, they sat and talked of plants. ‘Christopher did not want to go inside’ she remembered. ‘I did’.

It seemed almost too much like the premise for a radio play to be true: the three most radical and influential gardeners in Britain talking plants in June afternoon sun. But one day Catherine Horwood, author of the prize-winning biography of Chatto, pulled out a snapshot from the archive showing Christopher, dachshund and Beth (in primrose yellow pedal-pushers) sunning on shingle. On the back Beth has written in biro: ‘The day Christopher wandered into Derek Jarman’s garden at Dungeness’. And on the shelf at Prospect Cottage was the typescript (printed in our catalogue) of an appraisal of the garden by Lloyd, requested by Keith Collins (Jarman’s partner, whose preservation of the Cottage for over fifteen years is an act of great love).

Each of the three gardeners is dead, of course, but to make a shelter for memories is one point of the Museum. For the catalogue, Howard Sooley has written a memoir of gardening with Derek; Howard is, together with Peter Fillingham, one of only two people who gardened year after year side by side with Derek. This memoir is a very precious thing. And it is Howard’s photographs which are in ‘Derek Jarman’s Garden’ published by Thames & Hudson in 1995, and said by Monty Don to be ‘the most beautiful gardening book ever published’. (I first read it at Stansted Airport, waiting at the barrier for my mother in law to arrive from Italy. I was so bewitched she walked straight past. Cue her having no mobile phone and that evening I was in the doghouse for Derek).

We had hoped to open in April of course, and when the Museum closed we wondered whether to cancel the exhibition altogether. One reason we continued is the support of The Linbury Trust. A second is to be in Jarman’s spirit. He was diagnosed with HIV at the end of 1986; he bought the Cottage five months later. It was a garden made in defiance of pessimism, although his defiance was always salted with mischief. ‘I bought the place as a joke’, he told Anna Pavord. Pavord was, I think, the first person to publish on the garden, and we are very lucky to place her article between these photographs. Jarman shares the experience of gardening in stone and Pavord ends her description with a line that is beautiful, breezy and sad:

‘Peonies are impossible. This is his only regret’.

Derek Jarman: My garden’s boundaries are the horizon will open subject to government guidelines on a timed ticket basis on 4th July.

There is still a chance to enter our raffle to win an afternoon at Prospect Cottage: find out more 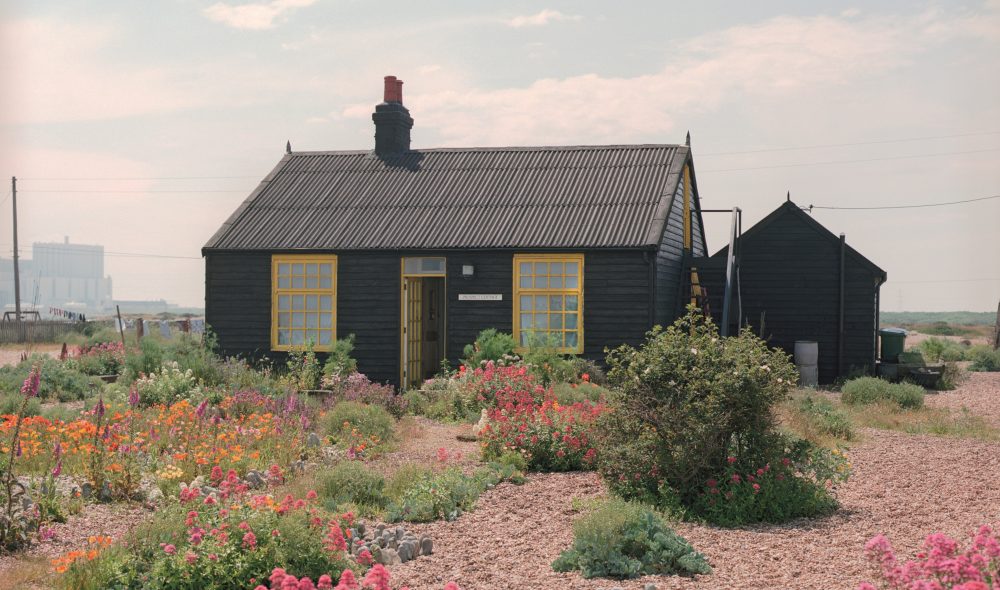 Derek Jarman: My garden’s boundaries are the horizon 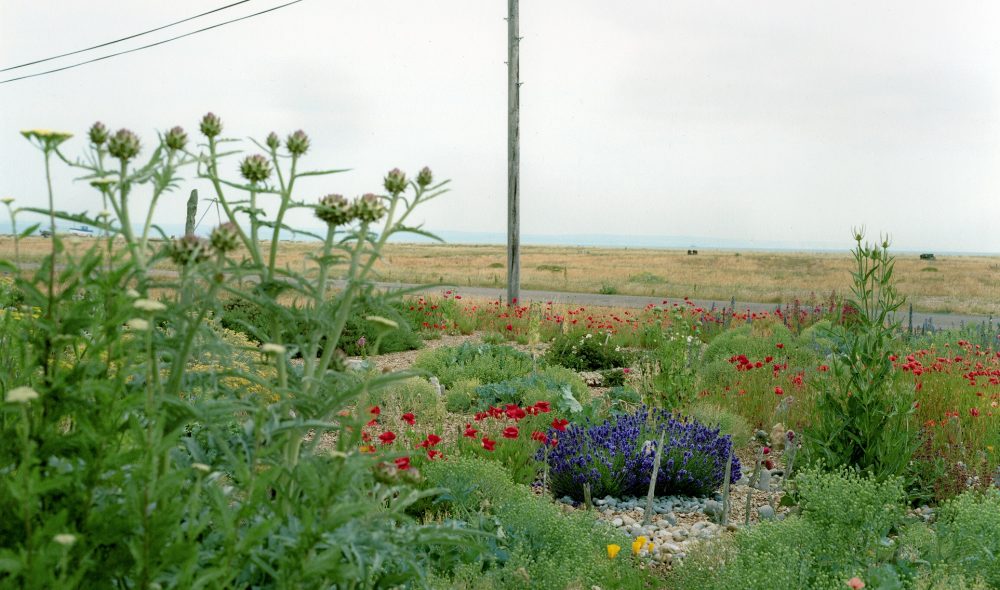 ‘Derek Jarman: My garden’s boundaries are the horizon’ Exhibition Catalogue