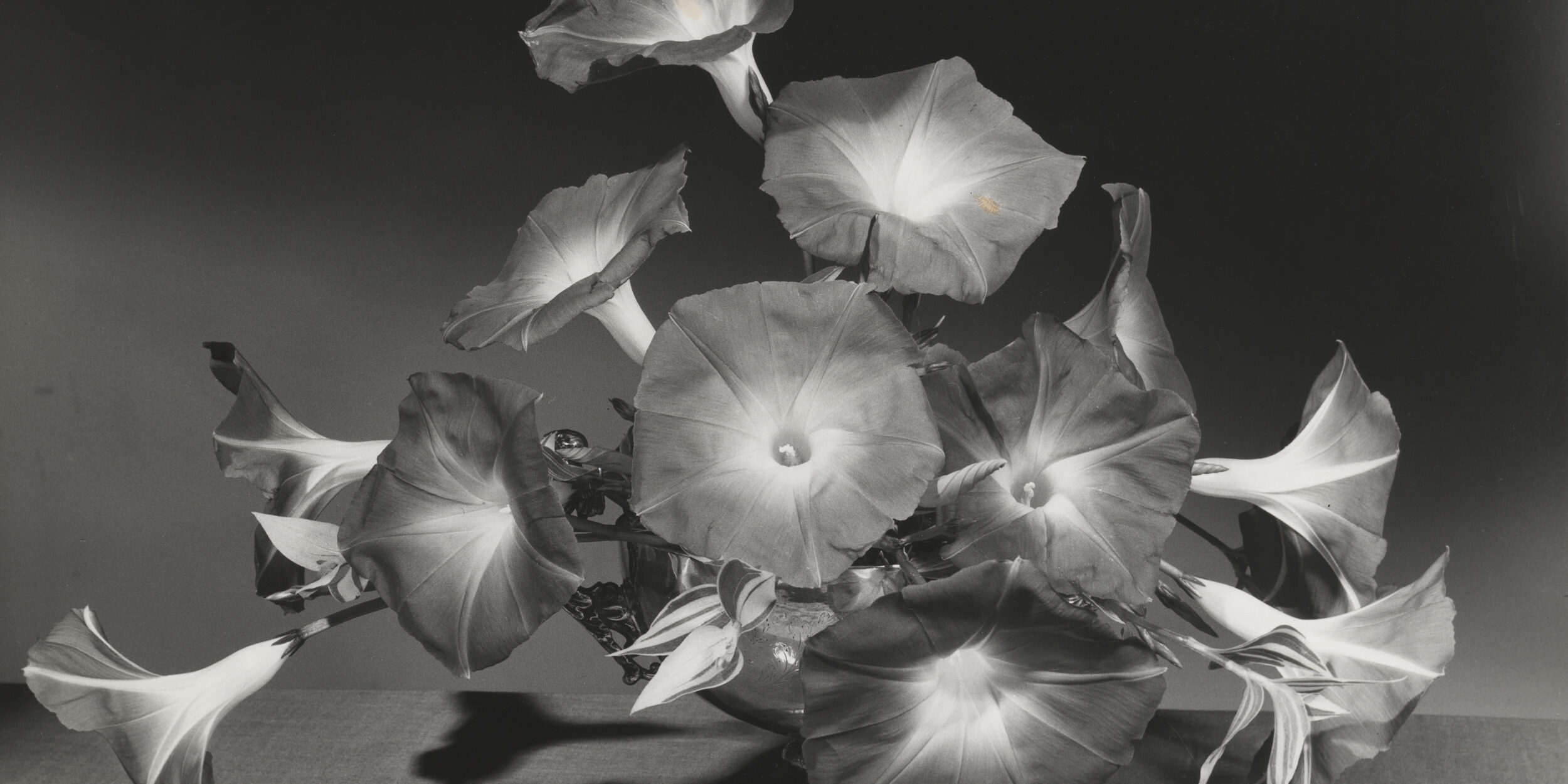 Whilst Spry didn’t start her business, Flower Decorations Ltd. until 1929 when she was 43 years old she quickly gathered around her friends, clients and collaborators from the most fashionable artistic circles of the day.

Oliver Messel and Cecil Beaton were both regular attendees at Syrie Maugham the interior designer’s glamorous parties and events. Messel celebrated her ability for ‘creating an atmosphere of delicious charm and comfort and the exquisite flower arrangements concocted by Constance Spry for every occasion made their first appearance in her house.’ Spry soon started to develop close friendships and artistic liaisons with the three of them and other leading lights of the day such as Norman Hartnell, Victor Stiebel, Rex Whistler and Norman Wilkinson.

Beaton’s self-portrait photos taken during his time at St John’s College, Cambridge featured vases displaying tulips and lilies and his Cambridge manservant remembered him being fond of beautiful flowers. When he published his article on the interior decoration of his family’s home in ‘Eve, The Lady’s Pictorial’ magazine in December 1926 he dressed each of the rooms he photographed with flowers and foliage.

Beaton’s photography often centred on staging a sitter within a highly designed and styled set. Many of his photographic creations for Vogue and his portraits such as those of Anna May Wong, 1929 and Marlene Dietrich, 1940 featured cascading flowers or floral backdrops to great effect. Such creations were sometimes produced by Constance Spry’s company, but Beaton had always loved flowers and he often created his own flower filled scenes.

Cecil Beaton found white flowers very chic, perhaps increasingly so under the influence of the interior designer Syrie Maugham who’d inspired the decoration of his studio at his home Ashcombe. He kept it filled with white flowers, including white cherry and viburnum blossom, longifolium lilies, hydrangeas, and chrysanthemums. Cecil noted how ‘each Friday I would motor down from London, at break-neck speed, with…boxes of flowers from Covent Garden.’

When Beaton’s sister Nancy married Sir Hugh Smiley in 1933, he and Constance Spry collaborated on styling the wedding. For the couple’s marriage on the 18 January Beaton designed a heavily embroidered bridal gown, adorned with sequins, pearls and sparkling silver thread which glittered as if dusted with snowflakes. Whilst Spry made a sumptuous bouquet comprising of lily of the valley. The resulting spectacle earned Nancy the title of ‘snow queen’. The bridesmaids were enveloped with swags of flowers fashioned into garlands of blooms that ran the whole length of the bridal party. Dipped in white paint, they shed little specks of white as the bridesmaids walked creating a theatrical winter wonderland. The effect was so delightful, one paper described how ‘many guests forgot themselves as to stand on the pew seats and on the chairs to get a better view of the enchanting scene in the church.’ 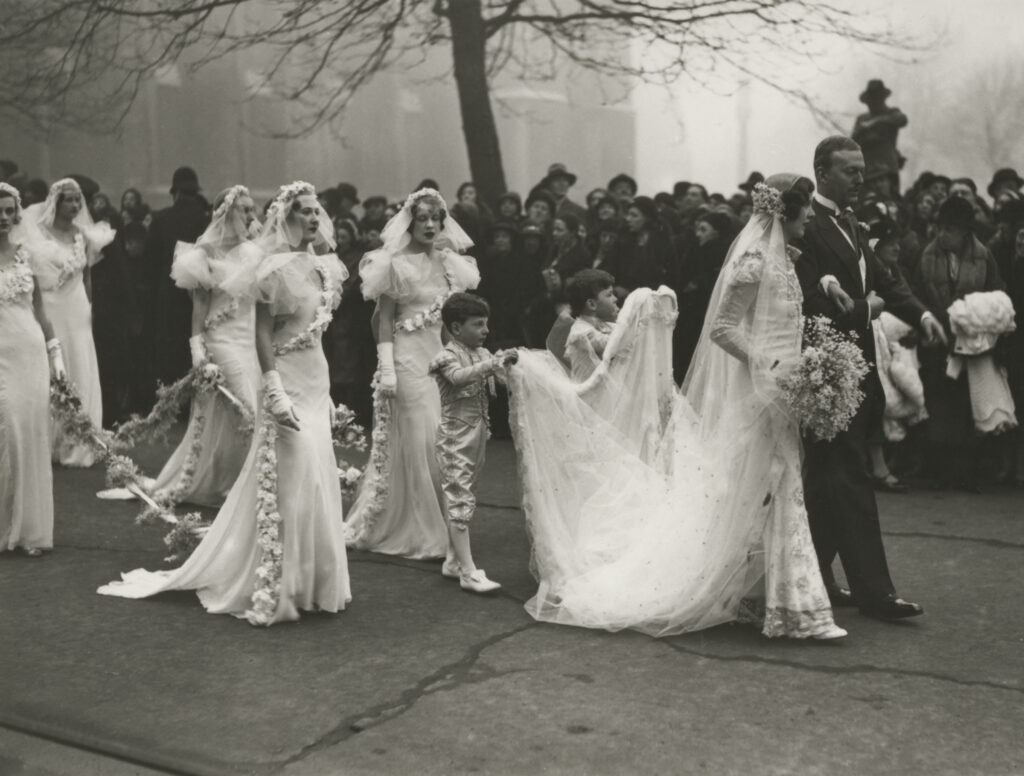 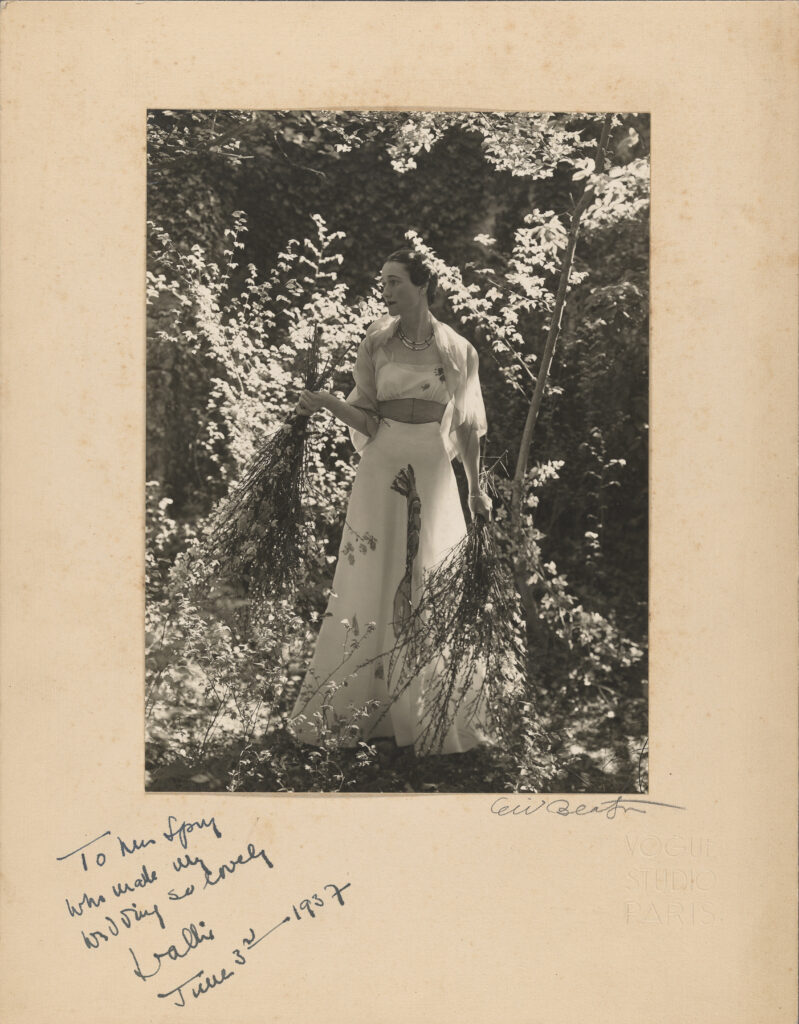 Cecil Beaton, Wallis Simpson in a Schiaparelli dress on her wedding day, with note to Constance Spry, 3 June 1937, ©The Cecil Beaton Studio Archive

When Wallis Simpson married Prince Edward, Duke of Windsor in 1937 Constance Spry was asked to do the flowers. Both the bride and groom had been longstanding clients of Flower Decorations Ltd. Whilst the match was deeply unpopular and the wedding was derided in the British press Spry and her assistant Val Pirie travelled to France to create the flowers at the Château de Candé.

Cecil Beaton was commissioned to photograph the couple for Vogue and the day before the wedding he captured Wallis Simpson in a gown by Elsa Schiaparelli. Whilst Spry was putting together the wedding flowers for the marriage Beaton posed Wallis Simpson amongst trees, backlit with sunshine and holding large branches of blooms. Collaborating once again with Spry these branches contrasted with the traditional, formally arranged l wedding flowers and gave the shoot a freedom that the official wedding photos lack.

Working regularly with Britain’s top floral arranger Beaton developed a deep understanding for the importance of growing cut flowers and their versatility for styling. In 1947 Cecil Beaton bought Reddish House in Broad Chalke, Wiltshire. He wrote ‘I am the proud owner of an exquisite country seat… it is the beginning of a new interest, and I am thrilled at the prospect,’ It was here he continued to develop his interest in flowers as he set about improving and extending the property’s gardens. One of Beaton’s most ambitious projects for the garden was to buy up the water meadows bordering the River Ebble in front of the house and create a water garden, ‘with a little private trout stream and a lake with an island, all for my own benefit’. Beaton used the house to host friends and illustrious visitors including artist David Hockney and Hollywood actress Greta Garbo. Flowers took centre stage in his preparations for guests as he filled each reception space with large decorative displays. A wooden Strawson & Son greenhouse together with a large cutting garden enabled Beaton to grow an abundance of annuals for cutting and arranging. In the basement of the house Beaton designed a large flower room which held his tools for cutting and displaying arrangements. This space often featured in photograph shoots and was a key part of the house under his ownership; in a 1962 House & Garden interview, flowers, most likely from the garden, adorn every single photograph of Beaton around his home.

In the 1953, as a mature student, Beaton enrolled on a course at the Slade School of Fine Art which allowed him to explore painting and drawing and develop his already considerable skills. In the 1960s Beaton painted ‘The Cutting Garden’ which the Garden Museum recently bought at auction. It is a fine example of the vibrant and painterly style Beaton developed at the Slade. The work combines two of his key interests from this period; his garden and painting. The work illustrates nasturtiums and morning glory and their brightly coloured blooms fill the canvas. Whilst nasturtiums and morning glory are not immediately acknowledged as traditional cut flowers Constance Spry arranged morning glory to great effect and their inclusion in the cutting garden is perhaps illustrative of Spry’s encouragement to grow and use non-traditional flowers for cutting and arranging. 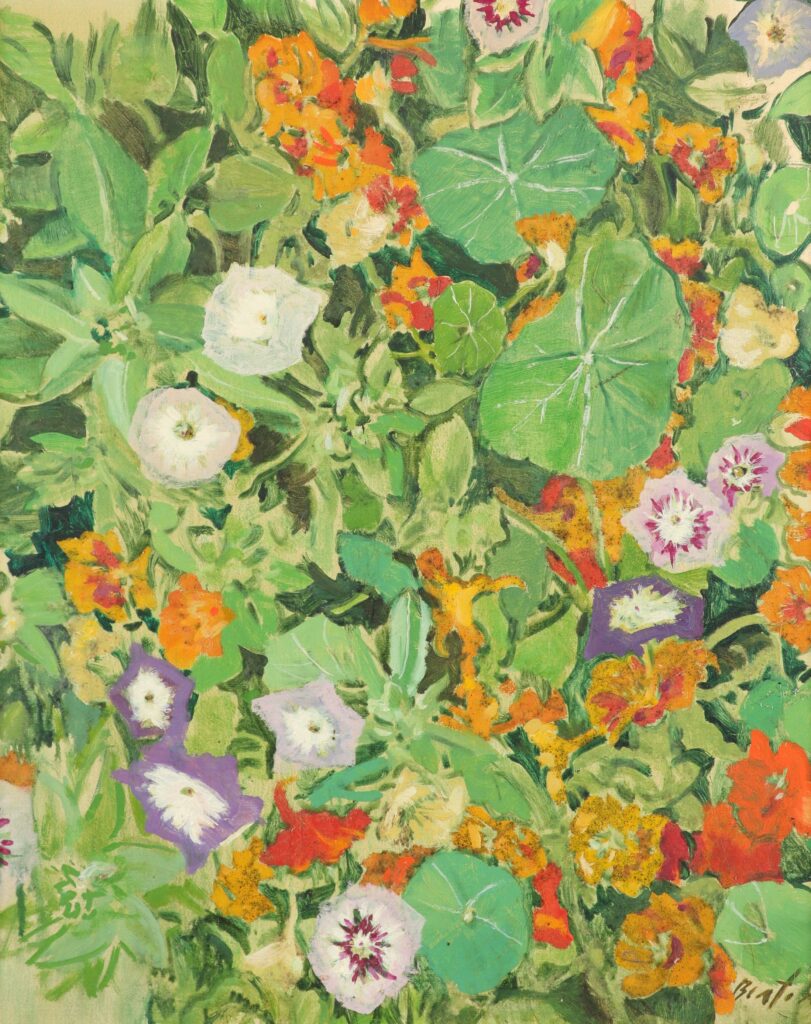 Cecil Beaton, ‘The Cutting Garden’, c.1960, oil on canvas. Purchased with assistance from the ACE/V&A Purchase Grant, the Art Fund and donations to the Garden Museum.