Beth Chatto (1923-2018) was an award-winning British plantswoman, author and lecturer whose garden in Essex demonstrates her ecological approach to planting; ‘right plant, right place’. She deposited her archive at the Garden Museum in 2015, and thanks to Archives Revealed funding from The National Archives, The Pilgrim Trust and The Wolfson Foundation, we have been able to catalogue it. Here, we share an online exhibit about Beth Chatto’s ecological approach to planting.

Beth Chatto (1923-2018) was a British plantswoman who pioneered the ‘right plant, right place’ approach to gardening. From 1960, she transformed an overgrown wasteland in Essex into a world-famous garden and nursery of unusual plants.

The site presented several challenges: the upper areas had dry, gravelly soil, while the lower areas were water-logged. Influenced by her husband Andrew’s research into plant ecology, Beth used plants naturally adapted to thrive under the different conditions.

The idea of grouping plants according to their natural habitats was innovative. Beth’s books, beginning with The Dry Garden in 1978, popularised this ethos, now the bedrock of modern gardening.

The Beth Chatto Gardens are a significant early example of environmentally sustainable garden design, using plants adapted to, and in harmony with, their local conditions. They are still open to the public for visitors to view and learn from.

All images are from the Beth Chatto Archive, © Estate of Beth Chatto, unless stated otherwise. Every effort has been made to contact the other copyright owners of the material reproduced here but please contact us if you have any further information. 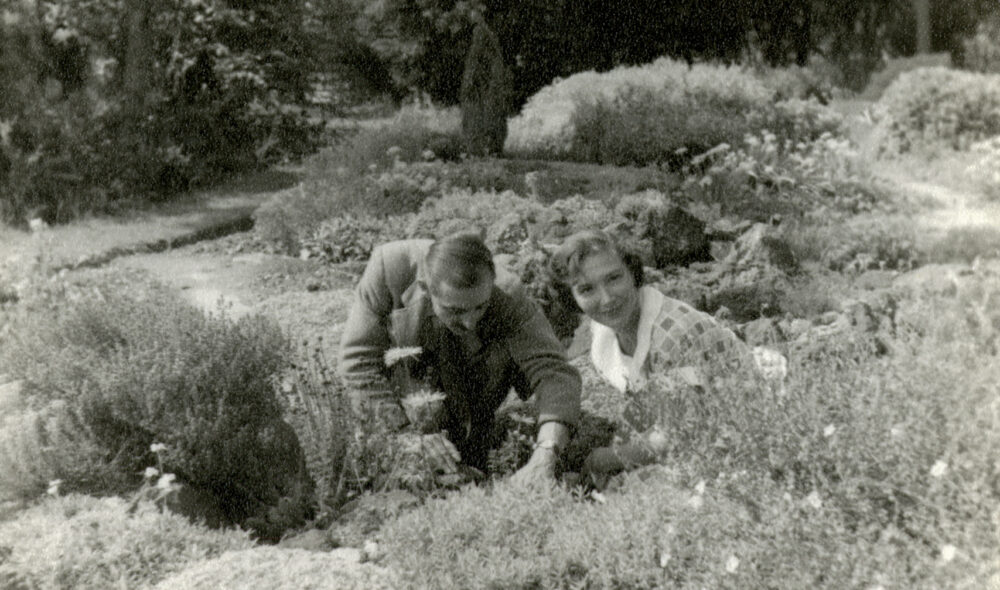 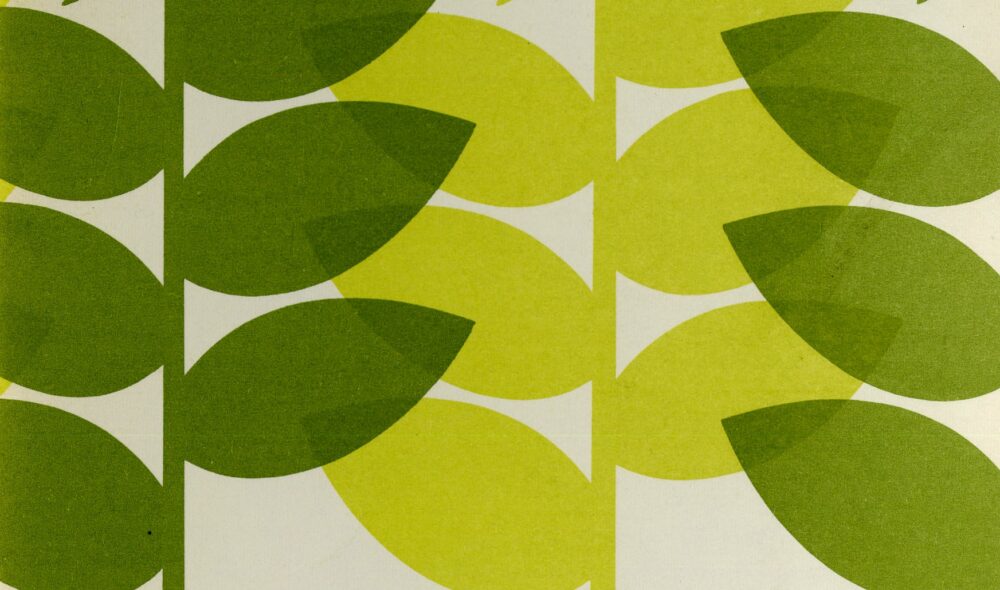 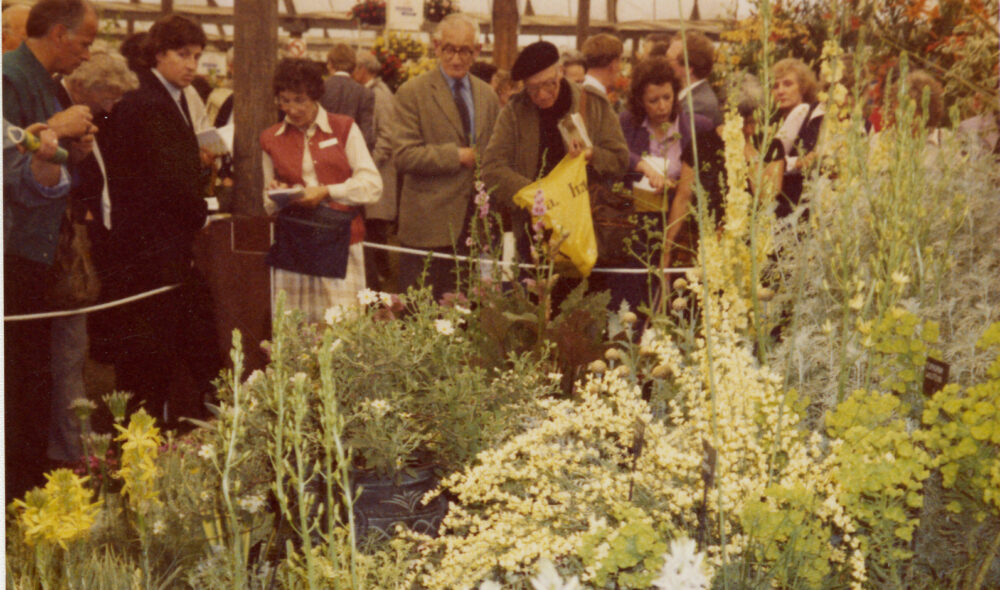 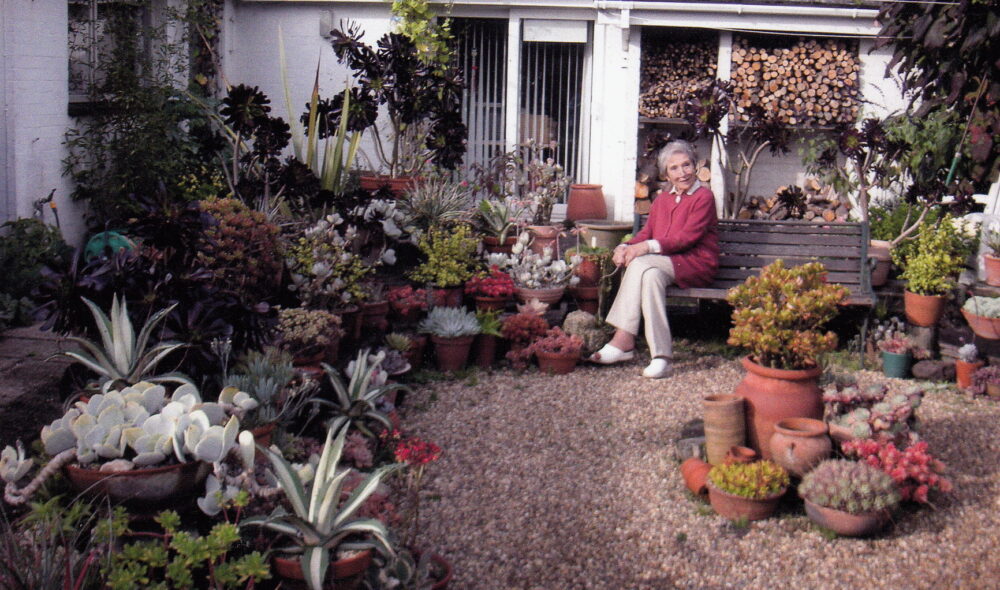 1926       The family moves to Great Chesterford, where Betty is given a small patch of garden for her   own.

1940      Betty studies at Hockerill Teacher Training College, specialising in literature, botany and biology. Her major project, on the plants of the local salt marshes, is carried out with Andrew Chatto’s help.

1943       Betty marries Andrew Chatto and moves into the Chatto family home of Weston in Braiswick, Colchester, where she starts developing the garden. She starts to use the name Beth.

1956       Beth is part of the Eastern England team for the first ever Chelsea Flower Arrangement Show.

1967       Beth opens the ‘Unusual Plants’ nursery and continues to give flower arranging demonstrations around the country to advertise her business.

1975 Beth’s exhibits for the first time at an RHS Flower Show, at Westminster Halls. There is some controversy over whether her plants qualify.

1976       Beth exhibits at Chelsea Flower Show for the first time, winning silver-gilt, and is brought to national attention through an article in The Sunday Times on her dry garden.

1978       Beth publishes The Dry Garden, the first of several books on particular habitats.

1987       Beth is awarded the RHS Victoria Medal of Honour and the Lawrence Medal.

1989       Beth attends a ‘World Tour’ with Christopher Lloyd, to New Zealand, Australia and the USA.

2002     Beth is awarded an OBE in the Birthday Honours list, and publishes The Woodland Garden, her last book.

2008     The Garden Museum holds a retrospective exhibition of Beth’s work.

2009     Beth is awarded an Honorary doctorate by Anglia Ruskin University.

2011       Beth is made the Paul Harris Fellow of Colchester Trinity Rotary Club.

2014      Beth is awarded the John Brooke’s Lifetime Achievement award by the Society of Garden  Design.

2019      Beth is named the RHS Iconic Horticultural Hero. The Society of Garden Designers announces the introduction of the Beth Chatto Eco Award.

2020     The Beth Chatto Gardens are listed by Historic England.

Beth Chatto was born Betty Diana Little on 23 June 1923 at Good Easter to William and Bessie Little. Both her parents were keen gardeners. Her father was a police constable and the family moved with his postings, first to Great Chesterford in 1926 and then to Elmstead Market in 1935 where Betty attended Colchester County High School for Girls.

Betty studied to be a teacher at Hockerill Teacher Training College (1940 – 1943), specialising in literature, botany and biology. For her major project surveying the plants of the local salt marshes she enlisted the help of Andrew Chatto, a local fruit farmer with a life-long interest in plant habitats. They spent two years mapping out different areas and observing how the vegetation changed as the water went from salt to fresh.

After graduating in August 1943, Betty married Andrew and moved into the Chatto family home, ‘Weston’ in Colchester. She taught at a primary school at Great Bentley. At home she began to change the gardens, replacing the traditional flowers with silver foliage plants which Andrew thought would have a better chance. She also began to make flower arrangements using flowers from the garden and hedgerows.  Around this time, she began to be known as Beth rather than Betty.

Before the end of the war, Beth resigned from teaching to help Andrew to manage the farm and settled into family life, raising her daughters Diana (b.1946) and Mary (b.1948). With encouragement from their neighbour, Pamela Underwood, who ran ‘Ramparts’ nursery, she attended the first meeting of the Colchester Flower Club in 1951, becoming an active member and participating in flower arranging competitions. In 1953, again encouraged by Mrs. Underwood, she gave her first demonstration to a new club at Saxmundham. This started her career as a lecturer and demonstrator, which gave her the impetus to learn to drive and become more independent.

Once their daughters were old enough, Beth and Andrew travelled widely together, visiting the Alps and countries around the Mediterranean to look at plants in their natural habitats. They were often accompanied by Andrew’s boyhood friends David and Nigel Scott. Through Nigel Scott they met the artist and plantsman Cedric Morris who became a friend and mentor to Beth, encouraging her interest in unusual plants and advising her that to make a varied garden she needed to move somewhere with a range of conditions.

In 1959, with Andrew preparing to retire due to deteriorating health, they built a house on a section of the farm which was considered too poor and steep for farming. They moved there in 1960, before the house was finished, in order to begin the gardens. Beth created a Mediterranean garden on the dry sandy soil near the house and widened the spring fed ditch at the bottom of the slope to create a series of ponds to plant damp loving plants around. The gardens were filled with plants moved from Weston or propagated by Beth from cuttings given to her by friends, including Cedric Morris.

In 1967 Beth began a nursery business, ‘Unusual Plants’. Many of her early customers were flower arrangers who had attended her demonstrations and asked her where she found her plants. She continued to give demonstrations around the country and encouraged Flower Club groups to visit her gardens for inspiration and to buy plants. In 1969 she began writing for a garden column in the Essex County Standard.

In 1975 she began exhibiting at major RHS flower shows and in 1976 she had her first stand at Chelsea, winning a silver-gilt medal. This led to an article in The Sunday Times on her dry garden which brought her to national attention. The next year she won the first of ten consecutive gold medals and the year after (1978) she published The Dry Garden, her first book. This was followed by The Damp Garden (1982), Plant Portraits (1985), Beth Chatto’s Garden Notebook (1988), The Green Tapestry (1989), Dear Friend and Gardener (1998, with Christopher Lloyd), The Gravel Garden (2000) and finally The Woodland Garden in 2002.

In 1982 Beth took a year off from exhibiting due to ill health but was back the next year, again winning gold. In 1983 she also took her first lecture tour abroad, to the USA, returning to North America in 1984 and 1986 for short tours and in 1989 also visiting Australia, New Zealand and the USA with Christopher Lloyd. In addition, she took many shorter trips abroad, to stay with friends and visit nurseries to exchange ideas.

Her own gardens continued to develop: the 1987 storm brought down several trees and provided an impetus to develop a woodland garden of shade tolerant plants. In 1992 she dug up the area which had been used as a carpark to create her famous Gravel Garden of drought tolerant plants which rely on only the natural rainfall for water. This was followed by the scree beds on part of the old Mediterranean garden, completed in 1999, the same year that her husband Andrew died.

Beth’s work and achievements were recognised by several major awards, in 1987 she was awarded both the RHS Victoria Medal of Honour and the Lawrence Medal and given an honorary degree from the University of Essex the year after with an Honorary Doctorate from Anglia Ruskin University following in 2009. In 1998 she was given a Lifetime Achievement award by the Garden Writer’s Guild and in 2002 she was made OBE in the Birthday Honours list. She was also made Paul Harris Fellow of Colchester Trinity Rotary Club in 2011 and awarded the John Brooke’s Lifetime Achievement Award by the Society of Garden Design in 2014. After her death in 2018 she was named an Iconic Horticultural Hero by the RHS in 2019 and the Society of Garden Designers announced the introduction of the Beth Chatto Eco Award in the same year. In 2020 the Beth Chatto Gardens were listed by Historic England.