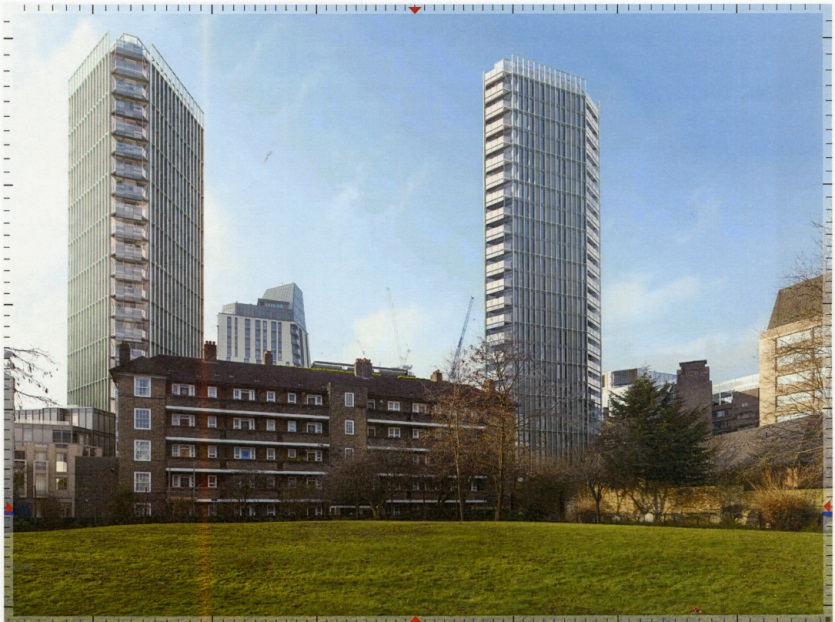 On 3rd December Lambeth Council called an extra session of its Planning Committee and discussed a single item: the future of The Fire Brigade Headquarters, built as an Art Deco complex of station, training tower and engine repair workshop in 1937. As one of over 4,000 people who had signed the petition put it to me, the Council needed to award consent before the end of December before a government grant towards the affordable housing within the scheme.

It was classed as a ‘Departure’ application: that it was at odds with the Council’s policy. Indeed, in 2015 it had re-written its own Conservation Area guidelines to say that ‘tall buildings’ were not ‘appropriate’ on the site owing to ‘heritage sensitivities’. The tallest of three towers is over eighty metres high.

In 2012 the Planning Officer had recommended approval for a scheme half as high. That time, Councillors over-ruled Officers, and were upheld by an Inspector at Appeal. Will Butler-Adams, the whizz behind Brompton Bikes, wrote to the Fire Brigade to suggest he take it on as a factory. ‘We are squeezed like peas in a pod at our current location and would be very keen to find more space to crack on and make more bikes’. The Fire Brigade never replied. It is only by selling off the blue sky above that you get forty million quid.

This time, the Planning Officer responsible for the case recommended over-ruling the policy. At the first vote Councillors voted 4 – 2 to reject. That was at half past ten. The Chair moved an amendment, so it was 3 – 3. And – as quick as a card player at a poker game – she slammed down her extra casting vote.

The community had lost. We made it to a tucked-away pub to guzzle, quietly, consoling packets of crisps before last orders. There we came across the Planning Officer and the Independent Lighting Consultant sharing celebratory glasses of lager.

A independent lighting consultant – let’s call this one Dr Lampshade – is a pivotal figure in modern urban development. For three hours, three intelligent Councillors questioned his advice. The leader of the community could only wave in the air, silent, a report in which the country’s leading authority on the subject – indeed, the author of the government guidelines – corrected his analysis. At one point, he admitted that a residential property would lose 71% of its daylight. Yes, seventy one percent. ‘We were unable to gain access to the property but believe these are short-term lets’. But short-term tenants are people too, called out a neighbour.

Dr Lampshade’s report had also advised the Council that the Museum would not be affected. I shared my photographs of the winter light on Dan Pearson’s garden, puzzled. On the ‘phone he said, sweetly, ‘I was referring to the old church. Think I got the wrong building’. The developer’s wooden scale model explained the mistake: although newly-made, it did not include the extension for education, The Sackler Garden, which we opened in 2017. Lambeth Council gave £300,000 towards the creation of these new spaces for education; its Planning Committee accepted a model in which three years later our award-winning extension had mysteriously vanished.

We had expected a debate. It was much closer to being a spectator at a one-sided football match as three Councillors, and the Borough’s Conservation Architect, stood up to a phalanx of officers – but with no referee to appeal to. But it is depressing to see grown men play such tricks. When, for example, the 20th century Society wrote to explain the significance of the Art Deco ‘silhouette’ of the Fire Brigade the Planning Officer showed the Committee a photograph taken from an angle. Which is not, of course, a silhouette. When the impact on Lambeth Palace was discussed, the only photograph taken was from the bottom of the garden, hundreds of metres from the windows of the Palace itself.

And the sleights of hand slithered on into the night. Other stats:

But we, as volunteers, were proud to come so close, up against the dozens of consultants whom the developer of a £500 million project can afford to employ. A lot is at stake. Between the announcement of the Officers’ recommendation to give consent, and the meeting, Richard Upton, the founder of u+i, bought over £200,000 of shares in his own company (as any property developer would).

But if the Secretary of States does call an Inquiry we have a chance to win.

Thank you for your support so far.
Whatever happens, it feels better to have tried.